It’s a good day to be an action figure collector! Iron Man 2 figures in the bargain bin, new Transformers and Thor figures sweeping the aisles, and even without a summer movie, a gazallion Star Wars figures everywhere you look. 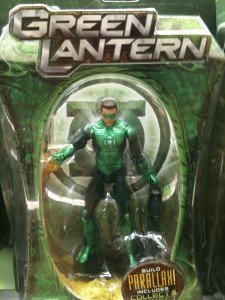 But for the next couple of weeks in brightest day and darkest night, one line will dominate the pegs. The Green Lantern line of action figures have already started showing up in some department stores less than a month before the movie makes its debut.

Mattel has two Green Lantern action figure lines right now in the shops. One based on the likeness of the characters from the upcoming movie and the other based on the DC Comic series. Both line-ups look pretty good but if there is one major gripe about the figures, it’s the price tag. At almost S$25 for the 3¾-inch
figures and almost S$45 for the 6-inch figures, it’s a price tag that collectors here aren’t exactly crazy about especially when the bigger ones are retailing for about US$20 only. And don’t get me started on how Hasbro’s 3¾-inch Marvel figures are S$19.90 only. 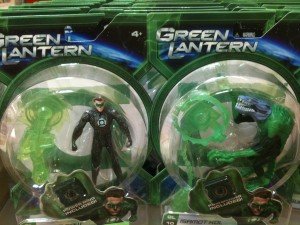 Anyway looking at the movie figures, you got a decent enough Ryan Reynolds- Hal Jordan likeness going there although I thought not as good a match as the Chris Hemsworth-Thor figure likeness. The 3¾-inch figures all come with a Green Lantern ring and I think it should be fit an adult finger nicely, well if not the ring finger then at least the pinky.

The 6-inch Movie Masters figures don’t come with a ring but each figure does come with one of 14 different body parts of a … SPOILERS AHEAD!!! … giant build-a-figure Parallax. Yup, you need to buy all 14 different figures to build the big true-to-scale movie villain. There aren’t any clear photos of Parallax out yet but if you want to know how he looks like, here’s your chance! But I don’t think all 14 figures are released just yet. 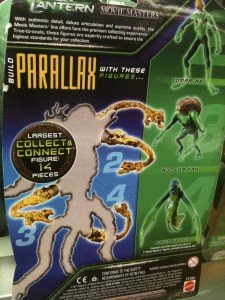 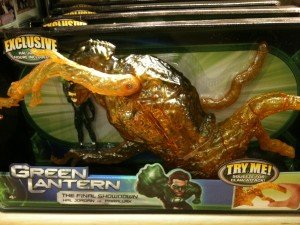 Now if you can’t wait to see how the giant yellow baddie looks like, there’s always The Final Showdown playset featuring Parallax and a 3¾-inch Hal Jordan. Squeeze Parallax’s tail and his chest opens up to grab Hal! Which I am assuming will be a scene in the movie? 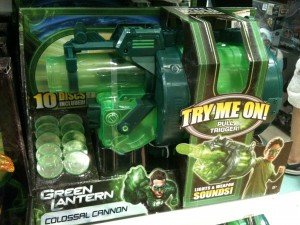 There’s also the pretty cool cannon ring construct that you can slip your fist in and get to shoot little discs although I can’t promise that it’ll fit most adults’ fists. 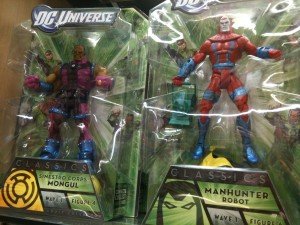 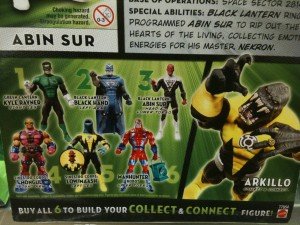 Then there’s my favorite, the 6-inch figures that are based on the current DC Comics Green Lantern storylines. You got Kyle Rayner, a couple of Black Lanterns and Sinestro Corps members and a Manhunter. I was very tempted if not for the huge price tag. Like the Movie Masters figures, get all of them and you’ll be able to build a 7½-inch Arkillo, the big mean Sinestro Corps member. 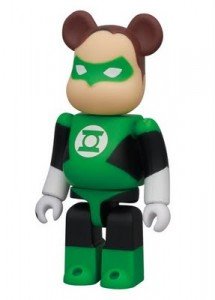 Finally, here’s a Green Lantern Corps member that I doubt we’ll be seeing in the movie or in the comics anytime soon, but there’s already a figure of him. Medicom’s upcoming Be@rbrick series 22 will feature a very cute Green Lantern model. Now I dare them to do a Sinestro Crops model and give him some mean teeth!