One good thing about the DC relaunch titles is that when you are reading so many new comics each week, it’s really easy to tell the good ones from the bad. After reading a title that you really enjoyed and you are all hyped up, imagine what if the next one you pick up doesn’t maintain that same level of excitement, it’s just going to suck big time. Know what I mean?

Well, besides that I also noticed another thing. Almost every first issue so far has to resort to a mystery villain or shadowy organization plotting against our title hero or group. After over 20 number one issues in two weeks, it got pretty tiresome pretty quick. I desperately wanted to read a good old-fashioned, well-written story where one guy, good or bad challenges the other, not so much hiding behind the shadows or a plot that’s riddled with hidden mysteries. As a reader, I wanted to see, in that first issue, the cards on the table as in who the villains are and what they are up to.

I think the closest to that are Action Comics #1 and Green Lantern #1. Both are enjoyable first issues. We see the villains and understand enough of their motives to get a clear idea of the plot. All right, enough ranting, here are some quick thoughts on some of this week’s new DC titles. 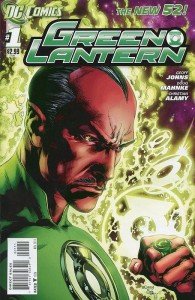 Green Lantern #1. The story here continues directly from the pre-52 relaunch where after the events in the recent War of the Green Lanterns saga, resident bad boy Sinestro is back to being a Green Lantern, albeit against his will.  While former title lead, Hal Jordan got himself kicked out of the Green Lantern Corps and is now back on Earth trying his best to jumpstart his old civilian life.

That’s all you really need to know to enjoy this latest installment by regular Green Lantern scribe Geoff Johns, with art by Doug Mahnke. It’s the character dynamics that made this issue so satisfying. Jordan appears to be channeling his younger movie version here, becoming a little more arrogant and full-of-himself as he struggles with life without a power ring.

And then there’s Sinestro. You think he’ll see this turn of events as a shot at redemption? Of course not! That’s too expected and boring! What we got here is another Green Lantern who’s also way more arrogant, full-of-himself and with a bloodthirsty mean streak! So what better cliffhanger here than to see them both working together? 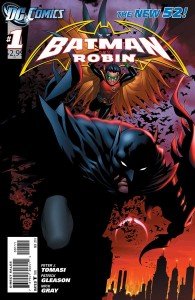 Batman and Robin #1. I found this week’s Batman title a little more entertaining than last week’s Detective Comics #1 even though Bats here was too emo for my liking. The star in this issue is undoubtedly the newest Robin, Batman’s son Damien Wayne. This Robin is still as obnoxious here as he was under former Batman and Robin writer Grant Morrison’s care and that’s a good thing. Current writer Peter J. Tomasi has made the kid the perfect foil to his dad’s darker, brooding side.

In this first issue, Bruce is all emo and moody cos it’s the death anniversary of his parents’ murder while Damien is his usual gung-ho, break-a-neck-first and ask-questions-later self. And yes, there’s a mysterious new villain lurking in the shadows, killing other Batmen from Batman Incorporated.

With the cool art by Patrick Gleason and no major complaints, I’ll be here for the second issue. 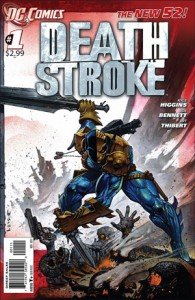 Deathstroke #1. This is another one of those new titles where I had no idea what to expect when I picked it up. You see, I was a big fan of Deathstroke the Terminator (that was his full name!) when he first showed up in Marv Wolfman’s and George Perez’s New Teen Titans ages ago. Back then he was as villainous as you can get, he had a cool broadsword, a kickass machine-gun stick and he killed everyone plus he even had sex with a minor! Over the years, various writers have made him more of an anti-hero or the mercenary with a heart of gold. Sometimes that worked, sometimes it didn’t.

So how was this latest remake by writer Kyle Higgins and artist Joe Bennett? Well, the first few pages were quite cliché, didn’t really impressed me. But it got better and bloodier pretty fast, and by the last page you will know which version of Deathstroke is back in business.

Overall I rather enjoyed it and I also liked the little nod at the last page to Marv Wolfman and George Perez, oh, and let’s not forget the eye-catching Simon Bisley cover. Lots of old school love here. 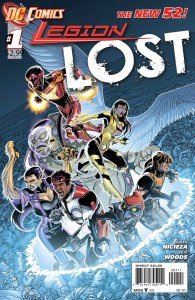 Legion Lost #1. This was too confusing for me so I can’t imagine how it was like for someone who’s new to the Legion of Super-Heroes or even the DC Universe.

The whole thing was just plain messy. I mean the cast here already isn’t one that’s made up of the most familiar DC characters around; like we aren’t looking at flagship guys like Superman or Green Lantern. Now to have a bunch of lesser-known characters show up at once, then have them acting loss (I know that’s in the title but still!) and confused, talking all at once, that’s just not going to work.

I had to re-read certain dialogue to see who’s talking to who or what someone is talking about. And since they are from the future, there’s that obligatory futuristic jargon to contend with, which didn’t really make things go smoother either. Writer Fabian Nicieza has come up with better stuff before so maybe there’s still hope. But with more new titles to check out every week, I think I know which one I’m going to drop if or when I have to.