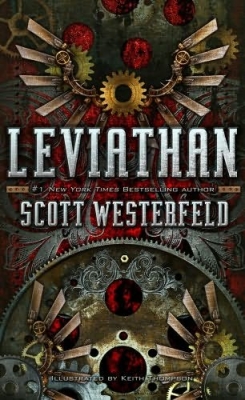 A lot of Steampunk fiction is primarily alternate history, and Scott Westerfeld’s series is no exception. Set in 1914 Europe, Leviathan and Behemoth (the first two of a trilogy) follows the exploits of Aleksander Ferdinand, dispossessed heir to the Austrian-Hungarian throne, and Deryn Sharp, a British girl who hides her gender in order to join the English military as a midshipman.

Behemoth came out just recently (with copies shipping to Singapore in about a week more), but I figure that we should start at the beginning and review Leviathan first.

What makes Scott Westerfeld’s steampunk (or rather more accurately dieselpunk)trilogy singularly unique in alternate history fictions though is that the warring sides of Germany and Britain do not battle using conventional methods. Instead the Germans (Clankers) use huge hulking automatons and the British (Darwinists) war via giant genetic modified beasts. In fact, the Leviathan (from which the first book derives its name) is a floating airwhale where Deryn serves.

In the first book, Alek is fleeing the German forces after the assassination of his father, the Archduke Franz Ferdinand. Hounded by the military, he makes his way to shelter. On the way, he is forced to work together with the British, who are supposedly his enemies, of whom Deryn is a part of. 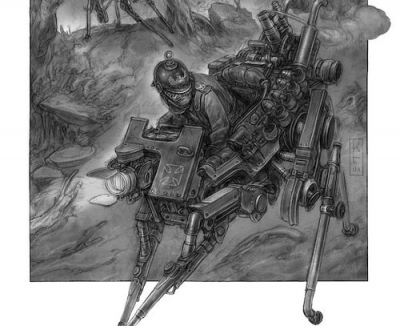 While supposedly a book targeted at teens (and shelved in the Young Adult’s section), Leviathan is a compelling read even for adults. Scott Westerfeld does a good job in encouraging emotional investment in the plot, with the characters (especially the supporting characters) expressing surprising breadth. More interesting is the alternate technologies invented and the opposing mentalities of the pro-mechanical Clankers and the pro-genetics Darwinists, as well as all the philosophical implications that arise (for example, the Clankers consider the Darwinists’ nonchalance at ‘playing with God’s work’ as supremely hubristic).

Another great thing that Westerfeld does is actually technically not in the story but in the afterword. He discusses the liberties in history that he has taken with the book, and it both serves to ground the story as well as to impart that little bit of historical fact to the reader. 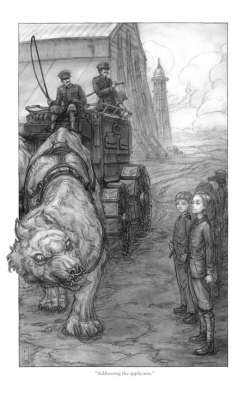 What tips Scott Westerfeld’s books, however, and what made them must reads in my eye, are Keith Thompson’s illustrations. It’s one thing to read about beasts and machines battling each other; it’s another to witness it in beautiful detail; Keith Thompson’s graceful pencils almost look as if they belong more on a comic book cover than confined in a book. I for one am looking forward to an ‘art of’ book.

Still, the book isn’t perfect. At first glance, Alek seems to be your traditional spoiled princeling on the road to self discovery, and Deryn is even worse. Being impulsive, skilled and almost perfect in every respect short with the only flaw of being female in an all-male military, she smacks a bit of Mary-Sueness. Alek does seem to be a bit more three-dimensional at the ned of Leviathan, and one can only hope that In the second book, Deryn will follow suit.