As a self-professed Analog Gamer, I love RPGs, and I’ve been down CCG-lane. I also like manga/comics, and as a recovering WoWaholic, I know the dangers of getting sucked into MMORPGland. Which is this manga more or less suits me to a T. King of RPGs is an American Manga by Jason Thompson and Victor Hao catered to the gamer. This thing references just about everything I know; from D&D to WoW to LARPers to Yugi-Oh… if you know about it, they’ll probably reference it (they’ve only got the first book available after all). 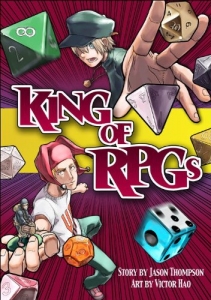 King of RPGs follows Shesh (recovering WoW addict) and his best friend Mike (the soft spoken JRPG/dating sim fan) as they discover table top RPGs thanks to Theodore, a gamer dedicated to being the world’s best DM. Of course, it wouldn’t be that interesting if all they did was RP (a fictional story about a fictional game would probably be a bit to meta) but the plot is a rollercoaster where the group also invades a CCG pirating syndicate, get mistaken for terrorists and literally drop into a Renaissance Faire. 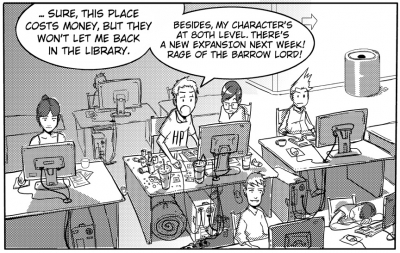 These characters are archetypes of all the gamers we know (Mike for example is really any main male protagonist in a Japanese romance sim/manga), but I feel that it’s acceptable for a comedy type manga that is essentially parodying gamer culture. In fact, it probably makes me identify with it that much more. I have literally laughed out loud at events in the comic that have essentially happened to me in my RPGer history, and who doesn’t know that guy who is a multiclass conquistador/paladin who tries to get his crew killed to cut down HR costs? I do hope that there will be some character development in the later books, the characters are entertaining enough that I’m willing to hang on for book to to see what happens.

Which also goes for the art. King of RPGs is more or less channeling your traditional manga style, which is acceptable but could be better. But this is the first book, and it’s good enough that I enjoy that art and the story, and would love to see Victor Hao come into his own in the later books. 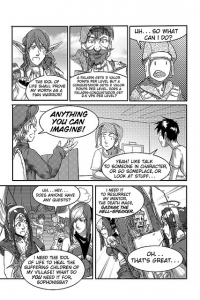 Essentially, King of RPGs is a great (if a little bit niche) comic. A bit rough around the edge, but great potential. If you like RPGs, or any kind of game, you’ll find this a fun enough read, definitely worth dropping some money to read it. And if you’re a hard core RPGer (of any kind), you’ll pick this up and read it back to back in one sitting, giggling at all the jokes that you yourself have witnessed.

Check out some pages from King of RPGs here, and decide for yourself if you want to get it!