Debris is a new Image mini-series by Peter Panzerfaust and Grim Leaper writer Kurtis J Wiebe (this man’s productive!) and Rebel Blood artist Riley Rossmo. Set is post-apocalyptic earth, the story focuses a young lady, Maya, who’s a disciple of the Protector – one tasked with watching over the very last human settlement on Earth. With water and and food running scarce, the humans have to find new sources while braving the outdoors, which has since been filled with mechanical creatures, including vicious giant ones known as Colossals. 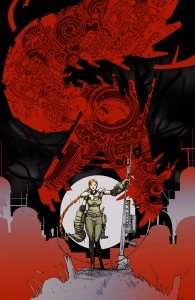 Right off the bat I’d have to say this is the kind of tale I’d enjoy – post-apocalyptic earth, a hero rising from the ashes (debris?) and giant monsters. Giant monsters that seem mechanical and run on gears and is all quite so steampunky? That’s just a double bonus right there.

This being the first issue (of four), Wiebe hits the ground running, and the action gets fast and heavy right away. Rossmo’s art seems perfect for Debris, lending a serious amount of dust and detail on top of well-defined characters. The mechanimals are a huge bonus, they’re rendered extremely well, and in widescreen splash-pages, it’s quite a sight to behold. The muted colour schemes also lend to the dusty feel of the comic, and all-in-all I’d say the art serves the story very well.

However, be it fantasy or science fiction stories, it’s easy to fall into the genre pitfalls of a hero rising to save a lone village etc etc … Still, it’s apparent that Wiebe is giving us what we expect from a tale like this, but also teasing with enough to make us want more. It helps that the setting is beautiful, enough weird things are happening, and that Maya herself is quite the fun character to read. At one issue out of four in it’s a strong start – but it also feels like a start of a longer series since there seems to be enough to put past four issues.

If you, like me, are a fan of heroic tales set in post-apocalyptic earth or stories that feature giant robot animals, this might just be your thing. It’s only 25 per cent in so it’s hard to say if Wiebe will deviate far from the genre norms and bring something new, but count me in for the ride.