Today’s post is going to be a short one considering I have only comments for X-Men Legacy #240, Wonder Woman #603 and Gotham City Sirens #16. All three have a sort of theme going on though, they’re the midpoint of stories. The issues where you’d want to find out what happened before or else it will confuse you. 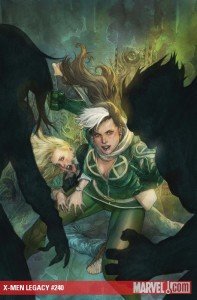 In X-Men Legacy #240, the Children of the Vault have captured Rogue and Magneto and brought them back to their own base. Kind of random but I find Paras hot in his responsible Asian son kind of way. He wants to go rescue the two but his father forbids him since he has to marry Vaipala first the next day.

However, Paras goes on and tells his father that he’ll marry her on that day itself. Considering they’re rich, it’s probably why they might get the priest there pronto as Rogue gets sentenced by the Children of the Vault and Magneto gets hooked up into a machine in the other side of story.

On an Indian marriage point of view, a real wedding takes the whole freaking day and it’s not just the vows. So HAH on that detail, doubt those who don’t go to said weddings would know though. Still, the details are pretty good on a summarizing it for a comic of limited pages. Suffice to say, the marriage took an interesting turn as we find out where Luz really is. I still don’t like her though, too arrogant and selfish. 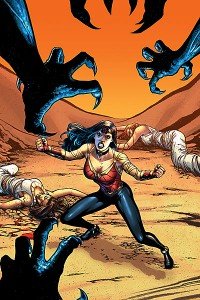 Meanwhile in Wonder Woman #603, this is an issue that really puts your Greek mythology to the test! I like it! Especially since she starts to fight with the Keres in which they are invisible to everyone else except her?! I didn’t know Wonder Woman could fight spiritual demon-like things! When did that happen? Still this is cool as she ends up in the underworld!

Not to worry though, she escapes it somehow.

However, how she escapes it might not be a good thing as she has to face the army that had been chasing the Amazons and her through the desert. The person that pulled her out of the underworld might have to do with the person who she has to face in the end. And oh my! Said person has her golden lasso too! DUH DUH DUH! 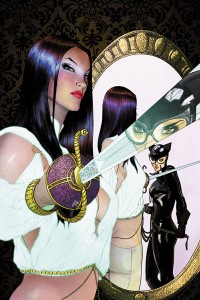 Lastly, we have Gotham City Sirens #16, this series has a fluctuation in their issues of being really good to being really out of character and bad. For issue 16, it’s being in the mid range with guest stars of Zatanna and Talia. The story focuses more on Selina Kyle because if no one knows it yet, Batman’s going to return from his time travel trip and most of the Bat universe comics are anticipating his return.

Here, someone’s kidnapped Selina and trying to get into her mind to find out about Batman. The mind sequences in here… Well, in my own bias, I don’t actually like the art even if it’s to signify it happening in her “mind”. For one thing, the use of gaussian blur. It makes it seem as if there’s an error in printing the comic even when there isn’t because the box with dialogue in it are pretty sharp. If only they did it in a different style or colouring, gaussian blur pretty much makes things hard on the eyes.

Oh this time, Harley isn’t too out of character but awww, no one listens to her until the last minute. Oh well!

That’s it for comic chunks! If you guys want me to check out any particular comic or have opinions on any of the issues above, go on and comment below! See yas till next week. 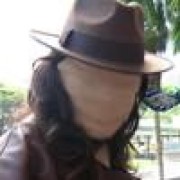