Thanks to our friends at Toshiba Singapore, we got a chance to catch and review Pirates of the Caribbean: On Stranger Tides on opening night at the luxurious Golden Village Gold Class cinema. As part four of a franchise we’d fallen in and out of love with, there were no expectations going into the cinema, except knowing that with producer Jerry Bruckheimer still at the helm, we were going to have a rockin’ good time. 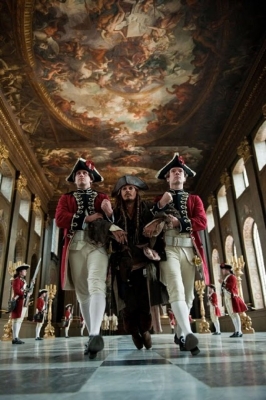 I am going to insist on referring to this movie as POTC4, because the title “On Stranger Tides”, other than being a reference to the novel that acts as the source material, simply had no relevance or reference to the movie itself. It is, however, a literal sequel of the greater Pirates series, following the epilogue of 2007’s At World’s End, which saw Captain Jack Sparrow (Johnny Depp) seeking the Fountain of Youth.

Our anti-hero isn’t the only one after the fabled Fountain, however, as the movie opens with a dying man, claiming to be the last surviving member of Ponce de Leon’s expedition for the same legend two centuries before. He is found by Spanish fishermen and brought before King Ferdinand, who immediately orders the Fountain found.

The Spanish crew is quickly chased by Captain Hector Barbossa (Geoffrey Rush), now a privateer (read: legal pirate) in the employ of King George, as well as by Sparrow, who ends up on board the Queen Anne’s Revenge, a dread ship captained by the fearsome Blackbeard (Ian McShane) himself. From England to Spain to the New World, the teams are also tasked to seek out a mermaid as well as the chalices of Ponce de Leon, making this the most exciting episode of The Amazing Race I’ve ever watched.

With the first trilogy of the Pirates series far behind, POTC4 feels like a self-contained episode that bring back Depp and Rush, who reprise their roles with great relish, while leaving almost everyone else we knew behind.

That’s a good thing though; the second and third Pirates movies floundered on all their continuity, with the movie having to lug around Orlando Bloom and Keira Knightley which… we really didn’t need. I’m glad that they did a ‘soft reboot’, so to speak, with the two main characters we care about, together with Master Gibbs being the only ones carried over into the fourth movie.

The only thing I’m sad about is the loss of old one-eye and his piratical buddy. Not having any philosophical discourses on parley or the proper scandinavian pronunciation of Kraken kinda made me sad.

Rob Marshall also lends a more whimsical, theatrical feel than his predecessor Gore Verbinski. However, the best thing he did would be to provide opportunities for each of his stars to have their turn in the limelight; what ultimately carries the show is the sheer passion each veteran actor brings to their roles, with Depp, Rush, McShane and the gorgeous Penelope Cruz each making the most out of their often limiting, undramatic lines.

Yeah. I really did enjoy Johnny Depp, Penelope and all the other big-name, older actors. It might be strange to see such practiced hands in such a light and fruity movie (I mean, OMG even Dame Judi Dench had a bit part!) but I think they do so with a touch of aplomb that might have rendered POTC cheesy in less experienced hands. 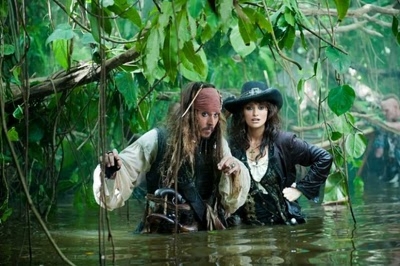 I love Cruz in this one. Despite the blockbuster nature of the movie, she truly owns the role of Angelica, playing the multiple roles of leader, damsel, love interest and pseudo-villain, making an otherwise throwaway role one that the climax of the movie hinges on. If only more critically acclaimed actresses brought the same do-or-die attitude and professionalism to their more mainstream roles instead of just saving it for the Oscar contenders (yes, I’m looking squarely at you, Natalie Portman).

Unfortunately, I was admittedly rather disappointed with Ian McShane’s portrayal of Blackbeard. While a fan, I felt that Blackbeard never quite achieved the full potential of his maleficence, mainly due to McShane’s ability to play the sympathy card even in full villain mode. Normally, this would be a boon to any story – it was after all what brought him critical acclaim in Deadwood and Kings (which I loved). But in POTC4, this turned out to further muddle an already convoluted plot.

If you want a convoluted plot, check out POTC 2 and 3! This was a lot better than those two. Then again, that might not be saying much. It’s sad to say that I would’ve been a lot more critical of the plot if I hadn’t already sat through POTC 2 and 3.

It’s still pretty messy though, isn’t it? There was too much blurring of the lines about who was the true villain of the plot – was it the Spanish, the historical rivals of the English? Was it Blackbeard, whose determination to reach the Fountain manifested in babaric cruelty? Was it Barbossa, who played both antagonist and ally with such aplomb in previous movies that his agenda was always in question here? Even after 137 minutes, I still wasn’t sure.

True. But at least everything neatens up in the end. More or less.

The supernatural aspects of POTC4 seemed also toned down, which was disappointing after the crazy heights of the first three movies. We’ve seen animated skeletal pirates, pirates transformed into sea monsters and voodoo goddesses, and to go from that to pretty intact pirate zombies and relatively regular looking mermaids seemed rargee underwhelming. Compared to the visually stunning visage of the unholy and supernatural powers of Barbossa and Davy Jones, Blackbeard’s ability to control ships seemed remarkably subtle; maybe too much so . It was mainly in those moments that I missed Verbinski’s action-oriented style.

I on the other hand, liked the mermaids. With the disneyfication of most mermaids (ironic since POTC IS Disney after all), I’m glad to see the return of the feral and frankly quite frightening mermaids.

But you’re with everything else. The Zombies might as well have been humans with a predeliction for body modification, and Blackbeard’s voodoo and ship controlling were… almost nonexistent, and considering we were used to over the top special effects I hesitate to say that if we were going for a more ‘real’ Pirates feel that maybe we should have done away with the zombies and ship controlling altogether.

At the end of the day, I didn’t expect much from the fourth installment of such a beloved series, so I’ll admit it was going to be hard to disappoint. Sadly, the movie didn’t do much to inspire either, and so joins an already long list of other good but mostly forgettable sequels.

6.5 out of 10, with most of the cast saving an otherwise dire plot.

It was a nice fun summer blockbuster romp, but Pirates of the Caribbean: On Stranger Tides (or POTC4) is just that, a fun romp with no ambitions of being any better. It’s better than the third, possibly comparable to the second (I’m conveniently forgetting the incredibly lame ending of the second movie), but unfortunately is a pale shadow of the first.

6.5 sounds like a good enough rating for it. The plot is acceptable, but not great. But then again, we all know that we’re just paying the money to see Johnny Depp in all manner of piratical nonsense, right?

First Look at ABC's New Shows: Once Upon A Time and Charlie's Angels