George R R Martin has just released the fifth book in his series ‘A Song of Ice and Fire’, and while many of us (myself included) may have just stumbled upon the tangled web of intrigue and betrayal that is A Game of Thrones (with the first season of the TV series wrapped up just a month or so ago), many other fans have been waiting for A Dance with Dragons for years… six years to be exact. 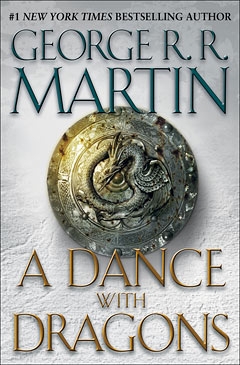 In ‘A Feast for Crows’ we only managed to read about the goings on of half the people we were interested in. George R R Martin had written so much about so many people that it required him to split his book in half to tell the ‘full’ story of half his cast of characters rather than half a story for all of them. So, it is after eleven years (the third book ‘A Storm of Swords’ was first published in 2000) that we finally get to see what has happened to Daenerys and Tyrion, amongst others. We’ll be going about everything in a roundabout matter to make sure that no spoilers take anyone unawares, but just in case… everything else under the cut!

As was warned in ‘A Feast for Crows’, most of the new book runs concurrent to the previous book, which means that people who were hoping for a huge resolution will necessarily be disappointed. It feels much like the fourth book when it comes to pacing, only set mostly up north or across the narrows sea rather than in King’s Landing. Which I suppose is understandable, as a seven (or maybe eight) book series will need to have books used to set the stage for the inevitable climax. But which is cold comfort to many of the readers who have been waiting years to see some sort of resolution.

Still, there is some resolution, especially when events in book five meet events in book four and we get a single ‘timeline’ again. Cersei and Jon Snow have their day in the sun (so to speak), and we do get to see Daenrys’ dragons grow. Of course as all fans must know, Valar Morghulis, with George writing off the lives of several characters, as he is wont to do. Less than I would’ve expected, but those that do will leave ripples in Westeros.

Unfortunately though, considering how long fans have waited, I doubt many will be satisfied. People who are interested can check out this Wiki section on the road to publication, BUT DON’T SCROLL UP OR DOWN THAT PAGE IS RIFE WITH SPOILERS. Essentially, this book has been dangled just out of reach since 2006, and nothing would have been able to live up to the expectation. But even though I’ve only known a game of thrones for a few months, I still feel a little short changed.

Fans of the series will take this book for the sustenance it has till the next release, but this isn’t the feast that many would have hoped for. Maybe the next book will be better.

Like Loading...
Tags
a dance with dragons a game of thrones a song of ice and fire book george r r martin review series