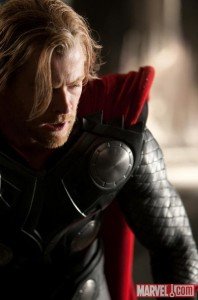 These words adorned the cover of Journey Into Mystery #83, the first appearance of Thor the Thunder God back in 1962.

Almost half a century later, the Asgardian is finally on the silver screen, played by rising star, Chris Hemsworth. Principal photography has begun for the movie, slated to hit cinemas in slightly more than one year’s time (In fact, the Asia/Oceania region might get to see it first, if Iron Man 2 is any indication).

Marvel has just released the first official photo of the silver screen “Thor” who will set the stage for The Avengers movie, coming in 2012.

Chris Hemsworth was last seen in the reimagined “Star Trek” by J.J. Abrams. He played George Kirk, the hero of the first ten minutes of the film, and arguably the one scene I will never tire of watching. In those few moments, he demonstrated he had the presence of a selfless hero, the emotional depth of a loving father, and of course the sharply defined jawline required of any action movie protagonist.

From hero to superhero, I believe Hemsworth has what it takes and wow, does he look good in that armor.

Marvel.com also confirmed the cast of the movie, now that filming has begun, and it seems like Hemsworth will be surrounded by a veritable who’s who in Hollywood’s A and B-lists, proof that Marvel Films is now a force to be reckoned with. The cast list also makes clear one thing – a lot of action is going to be happening in Asgard, and yet the bulk of the romance will be based on Earth, presumably.

I’m going to go out on a limb and say that Natalie Portman has learnt her lesson not to say yes to just any big budget movie trilogy that comes along, after the farce that was Episodes I to III. I’m hoping it’s the actress that said yes to films like “Closer” and “V for Vendetta” who said yes to “Thor” and Kenneth Branagh, and not just an A-lister looking to make a fast buck. To be fair though, whichever it is, I have a good feeling about the chemistry she’ll have with Chris Hemsworth for two reasons – 1) She had chemistry with a man who never took off his mask. 2) He’s not Hayden Christensen.

British actor Tom Hiddleston as Loki is nothing short of inspired though. No surprise, seeing how he shares screen time with director Branagh in the BBC crime drama series “Wallander”. Though young, his stage experience nonetheless gives him the gravitas and presumably the eerie, creepiness of the God of Mischief. I for one can’t wait to see him in action.

Anthony Hopkins as Odin is a bit of casting I’m honestly worried about – though he was the shining spark in “The Wolfman” and “Alexander”, I fear that he’s a little too ready to play any role he’s offered. Though I loved both the movies I mentioned, I would be a fool not to admit that they weren’t that great. Still, a Norse God is a welcome change from the slew of rather textbook Greek deities we’ve seen recently, with all due respect to Liam Neeson, Ralph Fiennes, Sean Bean and Kevin McKidd.

Speaking of McKidd, his “Rome” co-star Ray Stevenson plays Volstagg, one of the Warriors Three, the other two played by Tadanobu Asano (Hogun) and Josh Dallas (Fandral) . Who? Exactly. I’m guessing that exactly why former Fandral actor Stuart Townsend left the role – he probably thought it was too small for someone of his calibre. I’m surprised though, he played Dorian Grey in the campy “League of Extraordinary Gentlemen” and that seemed a pretty small role – or maybe that’s why he doesn’t want to repeat the experience nine years on. With all due respect to Josh Dallas, of course – kudos to him for agreeing to do the role on such short notice.

The cast is rounded out by Jaimie Alexander from “Kyle XY” as Sif, “The Losers” actor Idris Elba as Heimdall, Kat Dennings of “Nick and Norah” fame as new character Darcy, and veterans Stellan Skarsgård and Colm Feore as yet to be revealed characters (presumably baddies).

*phew* That’s a huge cast. I just hope Branagh knows what he’s doing. With Iron Man 2, Marvel Films has got a good momentum going leading up to “The Avengers”. “Thor” has high expectations to meet, and so far, things seem to be going on track.