Since the first day of Early Game Access of Bioware/EA’s new MMORPG. And today is the official launch of Star Wars: The Old Republic. SWTOR, as some like to call it, has been making waves in the internet community, some good, some bad. But what do I think after my first few days in the new (old) Star Wars Universe?

Let’s preface this with my background. I’ve played WoW back in the days when it was Vanilla, all the way up to the Burning Crusade, where it threatened to steal my soul. I don’t know what Cataclysms and angry Lich Kings are all about. I’ve also dabbled in EVE-Online, Star Wars Galaxies and Guild Wars a long looong way back. And as of right now I think the good in SWTOR outweighs the bad.

On to what’s been going on recently. In the past few weeks, there was moaning and groaning in the SWTOR communities about how EA/Bioware conned them out of their money because the advertised Up to 5 days early access wasn’t going to be a full five days for everyone. Then, when the company announced that they’d be moving EGA up for a total of 7 days early access, they complained about it too. I’ve seen complaints ranging from ‘my friends won’t be the same level as me’ to ‘someone’s gonna steal my awesome name’ to ‘I can’t fight for first to hit 50’, all because they’re getting free stuff. There’s also been complaints about the auction house, the UI, and populations on servers being BOTH too large and too small. I mean, come on… there’s really no need to threaten to pull someone’s arms off just because you don’t have it exactly the way you want, is there? 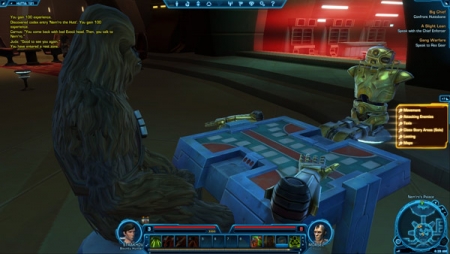 I feel like an old-timer when I say that I remember a time where things were much worse. Much… much worse. Yes, it was nearly a decade ago, but if you were willing to cut some slack on a game back then, I don’t see why you can’t now. And I have only experienced one server drop out, and the longest wait I’ve been to log in was 20 minutes (as opposed to my 3 hour record in WoW).

Are there things that I don’t like, or things that I wish could be improved? Of course. For example, I’d love to have larger servers rather than a multitude of smaller ones, and yes the auction house is a little bit clunky now. But I’ll give them a chance to tweak the game, rather than flying off the handle at the slightest provocation. And if things still don’t work the way I want it to, I’ll just vote with my dollar… 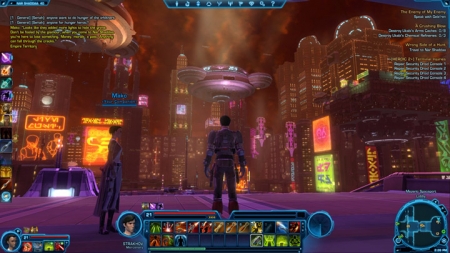 …After I finish seeing the story of Strakhov the Bounty Hunter.