Sid Meier’s Civilization VI launches in less than two weeks, and since our first impressions, we’ve had more time to give the preview from 2K Games a go. We were only allowed to play at Prince difficulty and choose from 10 out of 20 leaders, but there was already enough in there for us to have a good idea of how the game will be like at launch. Here’s a deeper look into Civilization VI, where we focus on the big changes that make the game possibly the best yet.

Civilization VI marks the 25th Anniversary of Sid Meier’s Civilization, one of the milestones of computer gaming history, and one of the formative games of my childhood. However, the general consensus of the internet is that Civilization V needed its expansions (the impressive Gods and Kings and Brave New World) to really shine, while Beyond Earth never truly lived up to its predecessor, Alpha Centauri. So, with the weight of the world upon its shoulders, does Civilization VI measure up to expectations?

After more than 50 hours in, we can happily say yes. Sure, there are some things that probably can be improved, but all in all, Civilization VI is one of the most impressive releases in the Civilization franchise yet. 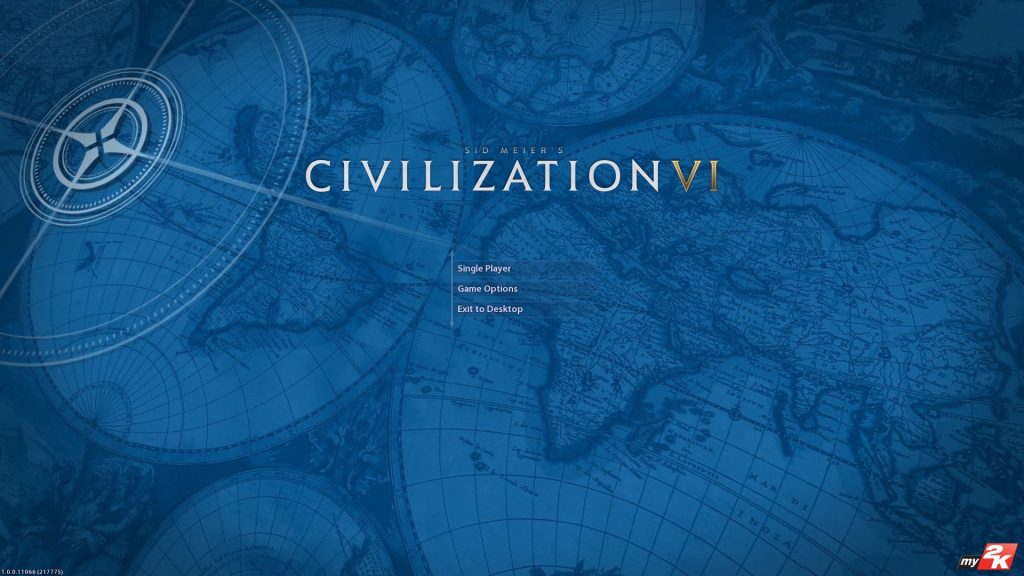 We start with what is probably the most noticeable change. The graphics has moved away from a more realistic rendering of the world to a more stylized aesthetic. While I went in expecting not to like the change, I quickly realized how integral this change was.

But the biggest change in Civilization VI is unstacking the cities. Only a small number of buildings are built within the city hex tile in Civilization VI. Many can only be built in their respective districts, which have to first be built (and also take up their own hex). 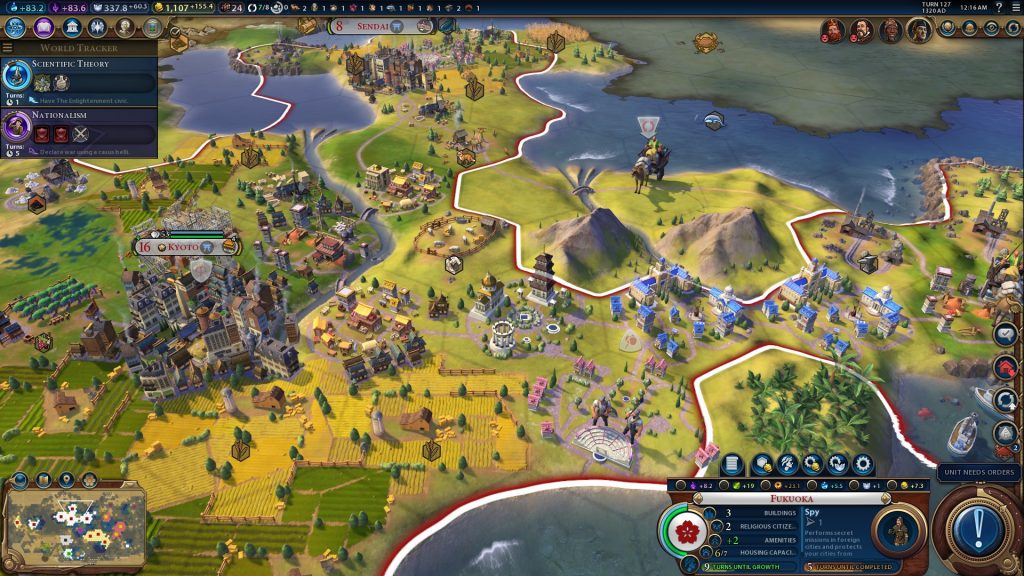 By pushing out almost all of the buildings (and World Wonders) out from the city hex to the surrounding ones, information is more accessible at the world map level. The new graphics thus help to make the map as readable as possible. I realized that I was clicking through city menus much less than in previous iterations, and the alleviation of micromanagement is a relief. It’s great to be able to see where my opponent’s intellectual campuses are on the map, and even to have a rough gauge when his World Wonder is going to be finished.

Also, it’s much cooler to be able to see all my own World Wonders on the map. 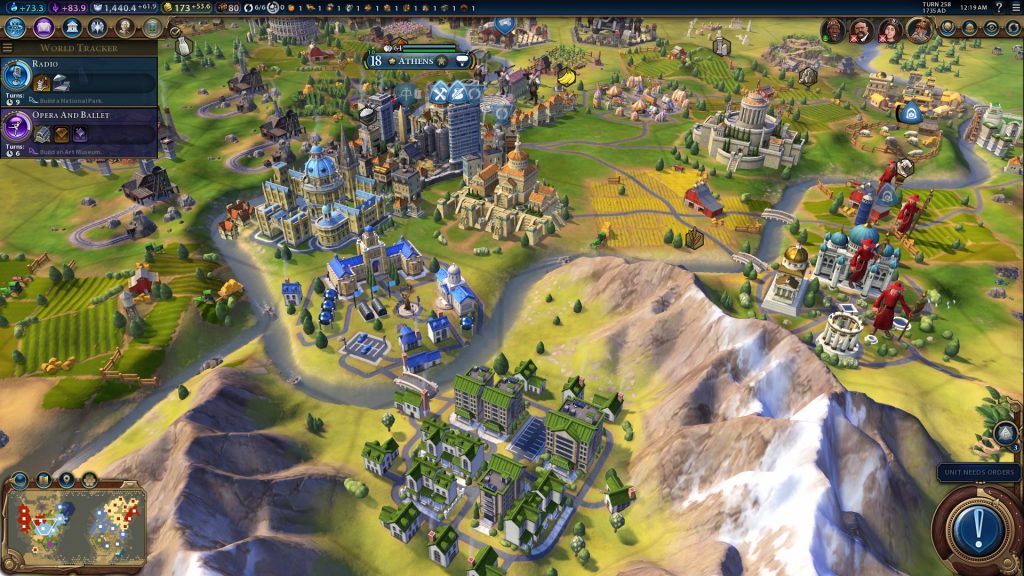 Another step away from micromanagement and busywork are the changes to workers and traders. Builders are the new workers, and instead of being around forever, they now are only able to build a few improvements before being depleted. This leads to much more significant decisions (especially early on in the game). Traders are also the new units that supply roads, which means that you are more incentivized to trade, either between your cities or with other civilizations.

Unstacking the cities also makes terrain a more important part of city placement and city building. Previously, it was sufficient to just have flat land and enough food and production bonuses to build a sprawling city. Now, with the different sources of adjacency bonuses to districts, it is seldom possible to have a city that excels at everything. This is further increased by the fact that districts are limited based on your city’s population. Instead, it is more likely that a city’s speciality is dictated by its surrounding terrain. It makes sense for a city located on a fertile plains beside a river be a site for trade and culture, but have trouble when it comes to manufacturing.

This also means that I now read the terrain very differently. Rainforests and mountains were once avoided, but now I actively seek them out so that my scientists can perform their experiments. I also make a beeline towards Natural Wonders because of how well they buff Holy Sites, the faith district. Indeed, your playstyle is not only dictated by your civilization, but also by your surrounding terrain. It’s not that going for a Science victory would be impossible without any surrounding mountains, but it would certainly be an uphill task. 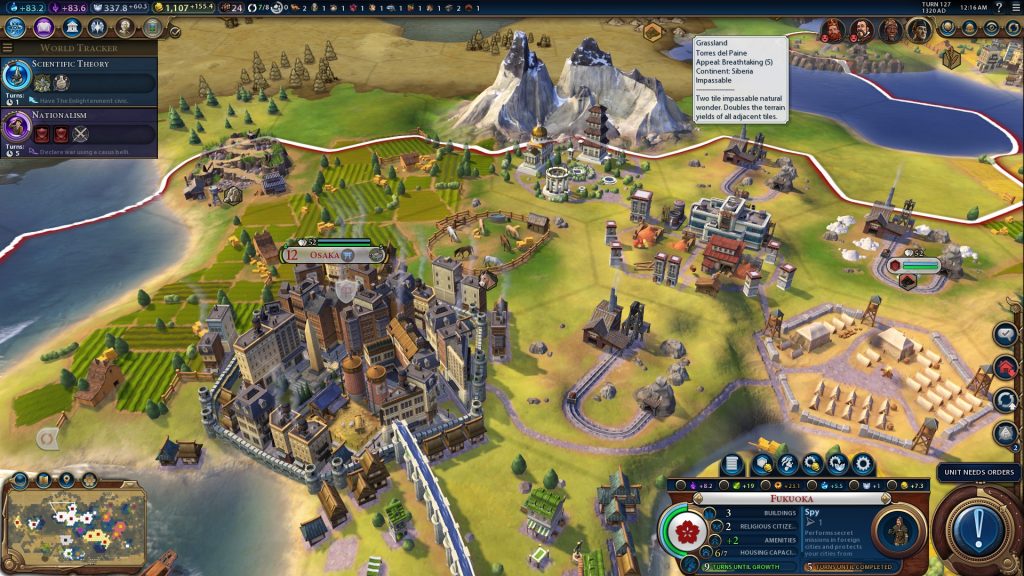 The concept of tailoring your playstyle to meet specific requirements is also carried over in the concept of civics and governments in Civilization VI. Instead of specific buffs, different governments have different types of slots in which to insert civics into. And instead of a static tier, civic cards are now earned on the civics tree (a new cultural research tree, much like the science tree in previous Civs), with bonuses that can be swapped out every now and then.

It feels like the government system is now a robust gameplay feature, and just as importantly, it makes sense that even governments of the same type (or indeed the same government during different time periods) would be similar, but different. Yes, my democracy will never be as warlike as an autocracy, but it could be very different from a democracy from another civilization.

Having your playstyle change based on your surroundings has also affected the tech tree. Both science and the new cultural research trees now feature Eurekas (or Inspirations in the case of the cultural tree): Significant boosts to researching that specific technology if you complete a related task.

These boosts do two things. Firstly, they shape a civilization’s approach to technology. It only makes sense that a civilization that has multiple coastal cities and naval units be much more advanced at naval technologies than a land-locked neighbour. Secondly, this incentivises actually going out and doing things, as opposed to turtling in your cities and pressing ‘one more turn’. When you get a science boost for getting 3 archer units, you tend to want to build them … and then you want to use them. 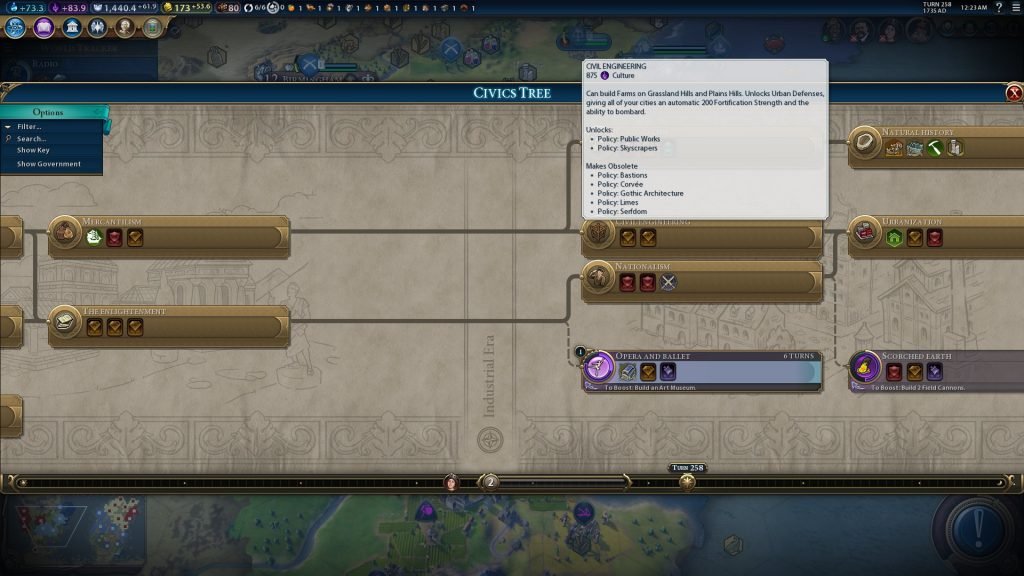 Your playstyle can even be dictated by your AI opponents. AI opponents now have 2 agendas each, which personal goals that will inform their playstyle as well as what they will be pleased or furious over. One agenda is always based on the leader. For example, Teddy Roosevelt will always get angry over wars on his continent. The other agenda is hidden, unearthed when you have sufficient sources of information about the civ (via trade routes, embassies or spies). This means that you can generally predict how certain civs will react to your actions, informing your playstyle to a certain extent.

I was in a game with both Philip of Spain (who wants to spread his religion) and Mvemba of Kongo (who wants religions of other civs). This meant that I needed to ensure a strong religion game of my own, in order to ensure no other civ won via religion. In another game I ensured that England (she likes to invade OTHER continents) and America (he likes to protect HIS continent) never get along. I spent most of the time eating popcorn watching the two of them constantly hate on each other.

Sadly, I think the AI only follows its personality scripting up to a certain point. I was surprised that England and America put down their blades at each others’ throats to declare a mutual war on me. It is possible that I might have broken some old promise to England, but it might just be because we were sharing the same continent for far too long. 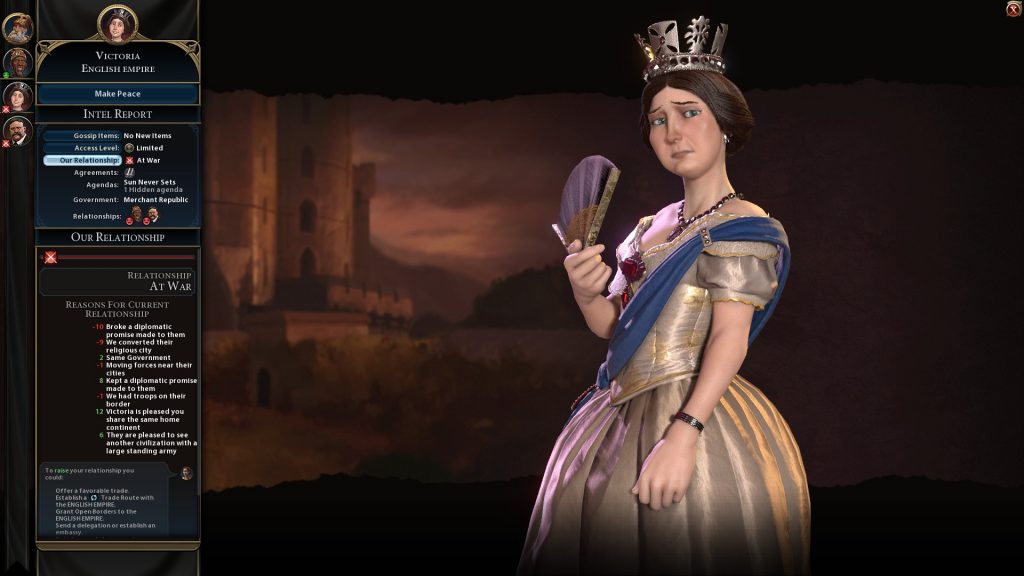 I halfway expected to need to fight for my survival, but it turns out that England and America were both mutually exhausted by their first war that I was able to defend against the nations pretty handily. A pivot to attack England failed, however, as I did not have enough of the correct units to take the city (even more than Civ V, you need a wide spread of basic military, support and siege units to take a city in Civ VI). I did however manage to pillage England so much that I effectively hamstringed her game. Between that and the silly mistakes I’ve seen some civs make (like their unprotected settlers getting eaten by barbarians), I’m not sure if the ease I had in defending militarily was due to the difficulty (we’re limited to Prince in the review) or due to some shortcoming of the AI. 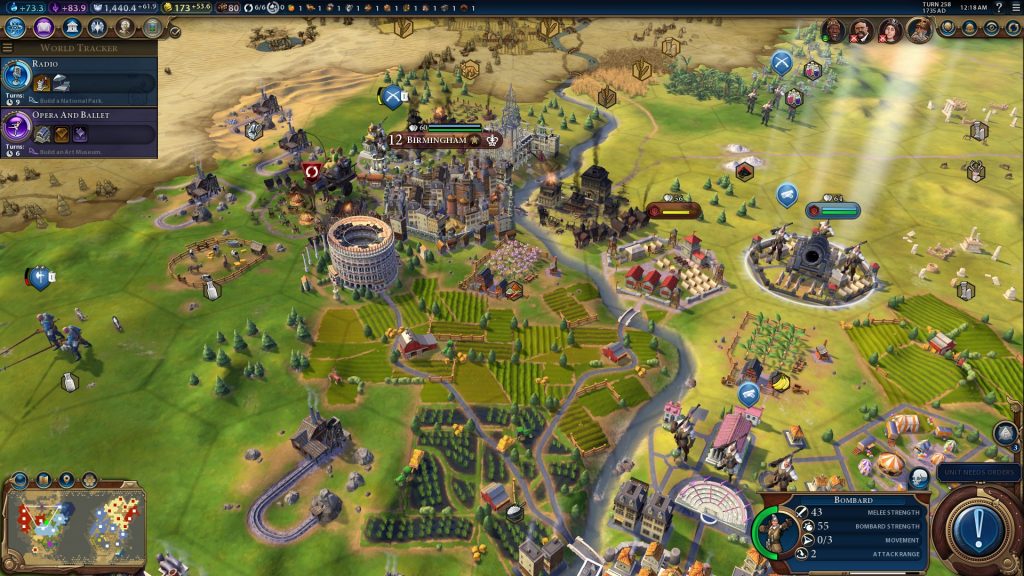 Another issue with the endgame is what seems to be an imbalance in the ease of the various victory conditions. Culture, domination and science all seem equally challenging, but faith is a little bit of an outlier. In both games I was pursuing another victory condition (culture as Greece and science as Japan), but I ‘lucked’ into the faith victory before I won the respective victories I was aiming for. Granted, I did ensure that I had a very strong religion (mainly because I don’t like getting my cities converted) and I had Mvemba of Kongo in both games (he WANTS another civ’s religion in his cities, which means religion based victories are a lot easier with him around), but towards the end it seemed like all I needed to do was spam faith units to convert and overwhelm opposing cities. It probably didn’t help that religious units are almost invulnerable (only other religious units can attack and damage them). 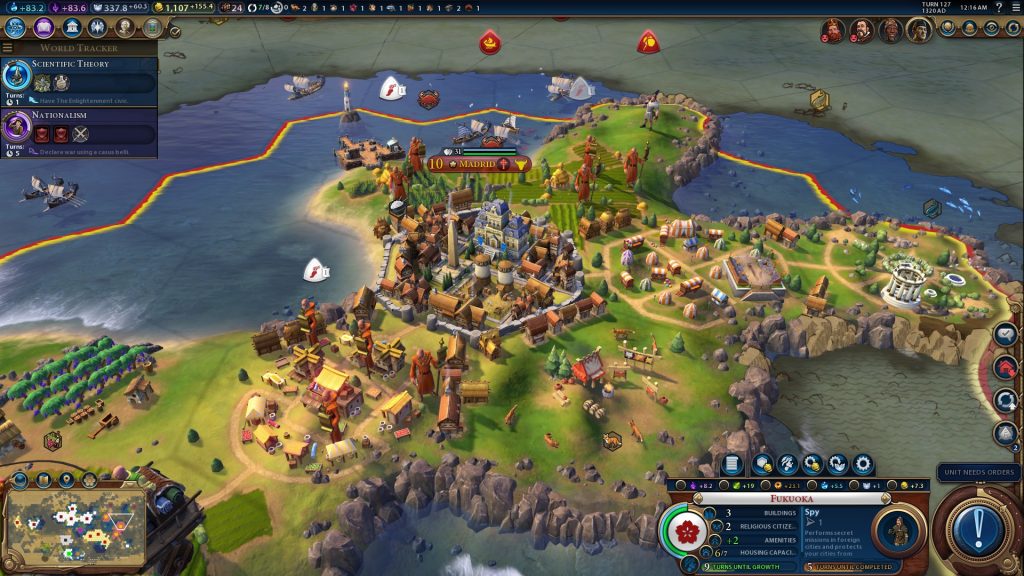 Still, the amount of gameplay that is both new and interesting is overwhelming. I’m more than likely to hold off my second victory as Japan to test out some of the late game mechanics, but except for the one or two outliers, all my experiences in Civilization VI were overwhelmingly great. Yes, there may be one or two things that would be improved, but I’m amazed at how well and how polished most of the new mechanics are. I admit that I am a fanboy, but I would be more than happy to get Civilization VI at launch. 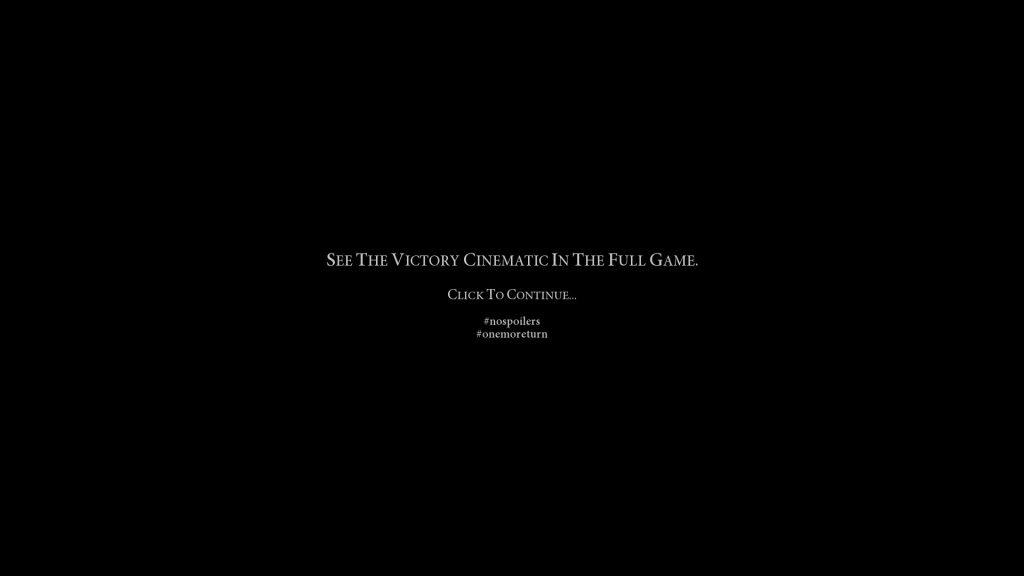