While war may never change, Bethesda and Fallout surely can. As a highly interesting aside to E3’s announcement of Fallout 4 (coming this year end, so thankfully I might actually have time to play it), Bethesda also announced Fallout Shelter. While it takes place in the same universe, Fallout Shelter is a wide departure from the RPGs that we expect of Bethesda. 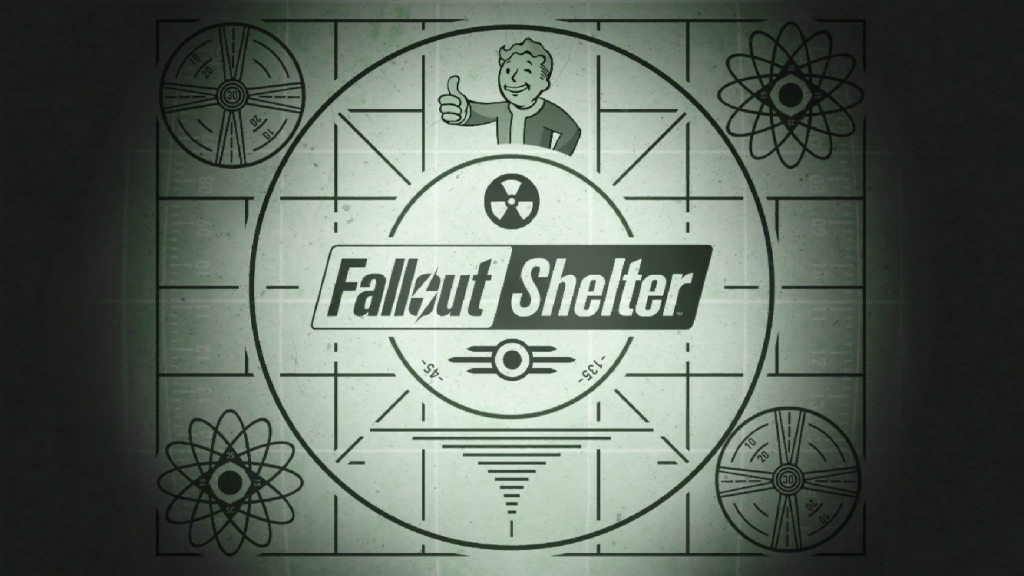 Instead, the gameplay is a buildy-timey mobile game reminiscent of Tiny Tower, Farmville and the like. You play as the Vault Overseer, building rooms that provide resources (power, water and food at first), and assigning your minions (Vault Dwellers) to the rooms in order to produce those resources. You even have mini objectives that provide caps or lunchboxes (more on that later) as rewards. And that is where the Farmville comparison ends. Your resources tick down, and if your resources run low enough you Vault runs into trouble, suffering from brownouts, health or radiation issues. In addition, your Vault Dwellers can leave the vault to explore, fight, and gain XP and equipment. They even get into relationships and impregnate each other (which is one way to get new Vault Dwellers). 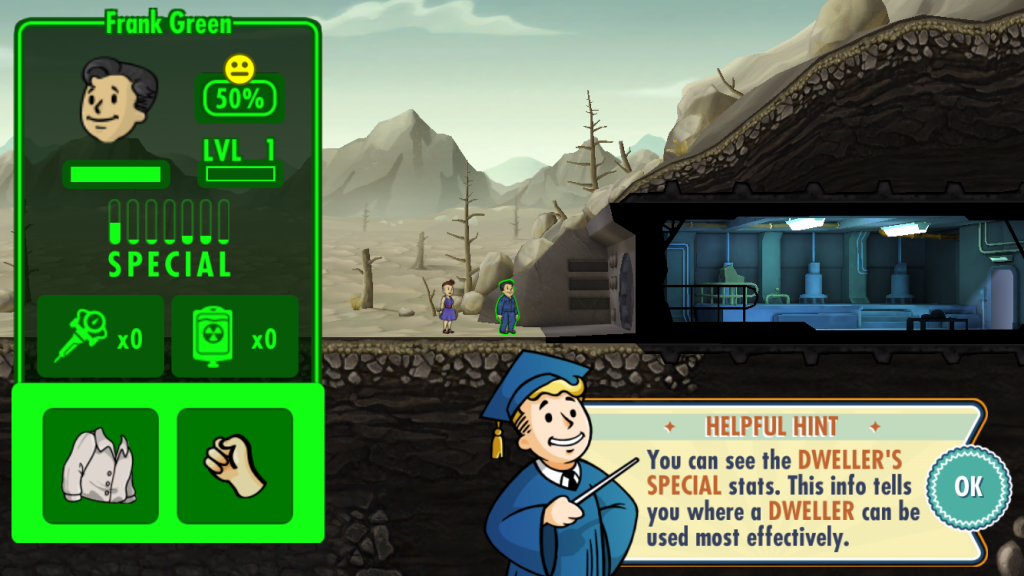 It is refreshingly free of ‘must play’ events, paywalls and ‘FTP’ microtransactions that limit many such app games. For example, while your Vault drains resources, once you minimise the game it stops draining after a certain time, but each room countdown keeps on ticking. This means technically you should never close your vault and return to a dead vault, as long as you didn’t send anyone out to explore during that time. Yes, it is true that the game does have an option to purchase lunchboxes (which provide in-game benefits like resources, equipment, or even rare items and people), but this is purely optional, as you also get the lunchboxes as a reward for completing an objective. More importantly though, the lunchboxes are fun, but very very far from essential, which is what any sort of payment should be. After all, your Vault can just get equipment from scouring the wasteland, albeit a slower task.

Another great point of Fallout Shelter is how closely they follow the universe. From the game’s Pip-Boy intro to the fact that your Vault Dwellers’ stats are measured using the same SPECIAL system, the game world is directly plucked out of Fallout. Some of the rare characters that turn up are even NPCs from former games. In fact, in a twist out of some bizarre fanfic, I have Amata shacking up with Tenpenny. I especially like the game’s aesthetic; having pipboy equivalents run around in a vertical cut out of the vault (similar to XCOM’s ant farm) makes the whole thing feel like it’s straight out of Fallout. 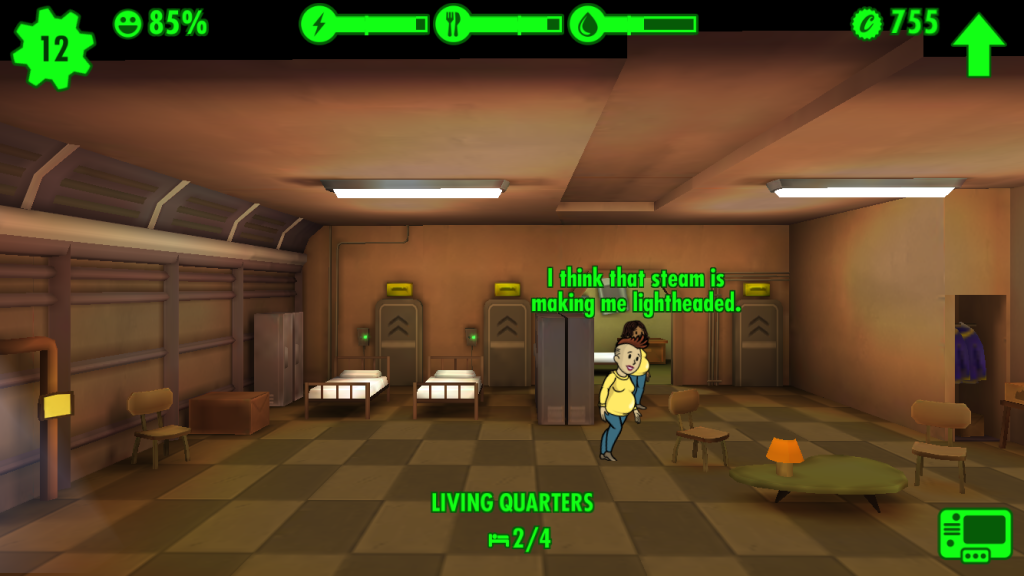 Some various comments I’ve seen about the game mention its shallowness, or its reduction of Vault Females to baby-carriers, but I don’t think these are particularly valid complaints. Firstly, as Vault Overseer you’re more or less God, running a strange social experiment within the confines of the Vault. You have the power to override parents’ decisions on how to name their child, or assign people to certain death by wandering outside the wilderness. Treating your dwellers like cattle or an eugenics program seems like par for the course. In fact, I generally have the same few guys I like to stud out. They even track offspring, so a Vault Overseer can’t mandate incest. (Yes, I tried. For science.)

Secondly, Fallout Shelter is essentially a time game, so it has that same mindlessness of clicking every few minutes. I do admit that this means that by definition it will be boring after a while. However, it’s something that’s supposed to be run in the background. It is not Fallout 3, and its simplicity allows you to hang around and watch your dwellers go about their lives. Many stories of drama are also emergent, and come from the player-driven handicaps. Their comments are pretty hilarious. 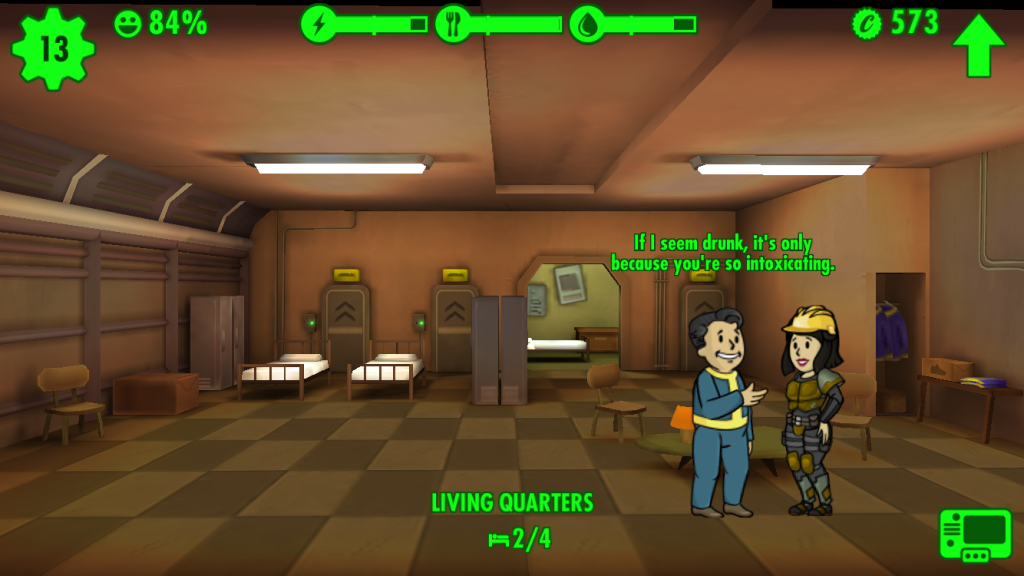 I do have a few niggly points, though. When the vault balloons up to large numbers, the difficulty of handling and exchanging equipment balloons exponentially. In addition, I find it difficult to track each Vault Dwellers SPECIAL stat and what they are all good at, which means some people are not as happy as they should be. Levelling up also only increases hp. I know that SPECIAL rooms can increase stats, but I was hoping that certain levels could give a stat bump as well. I would have also liked some endgame scenarios. Lastly, I guess it’s because of the 3d rendering, but Fallout Shelter seems to DEVOUR my iPad Mini’s battery. It is definitely not a game you want to keep on your screen, but one you tab out of all the time.

All in all though, Fallout is a great surprise from Bethesda, and a pretty good free to play game to boot. I’m tempted to give them some money buy buying some lunchboxes, because it has definitely earned my money. I just wish there was some way to carry over items into another vault.