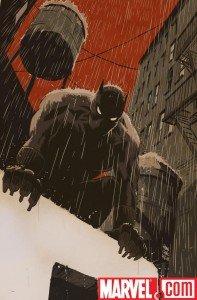 All through San Diego Comic-Con, they teased the identity of the new Man Without Fear, the protector of Hell’s Kitchen. Yesterday on G4’s Attack of the Show, the tease came to an end with the revelation that T’Challa, best known as the Black Panther, will be the new guardian of the New York City neighbourhood.

The switch will occur with issue 513 of the title in December, which will be renamed Black Panther: The Man Without Fear. This renaming but not renumbering strategy was last seen when The Incredible Hulk title was renamed The Incredible Hercules back in 2008. It will be penned by novelist David Liss and drawn by Francesco Francavilla, who also drew the teaser images.

Check out the stunning announcement after the break…

Reactions were naturally mixed about this news, on the grounds that the “Shadowland” event, where Matt Murdock leads a personal vendetta as the new leader of the Hand ninja clan, that led to this change has not been the runaway street brawl it should’ve been. More detractors simply say that T’Challa simply isn’t a great fit for the role. I personally think that Marvel made the mistake of teasing at least two more interesting candidates, and then revealing it to be Number 3. 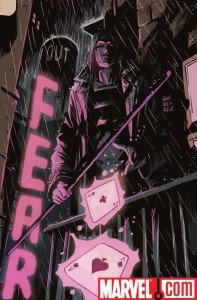 The most awesome choice would’ve been the perennial fan favourite Gambit. With the mutant’s history clearly showing his street credentials, the Ragin’ Cajun was no stranger to the likes of playing the protector role. In fact, his time as Apocalypse’s  Horseman of Death has also given him powers beyond his usual kinetic tricks, and would’ve been a much appreciated advantage in Hell’s Kitchen.

Francavilla’s artwork, in particular gives the man named Remy Lebeau a look that is less clear about his heroic nature. It is never clear if Gambit’s presence in Hell’s Kitchen is a boon or a bane. Such a duality would’ve been a great storyline, except that Gambit was passed over for The Man Without Fear. 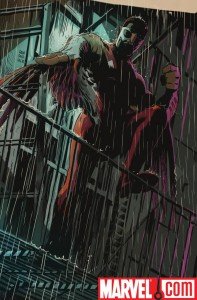 The contender for the role I was rooting for was Falcon. While Ed Brubaker has been doing an excellent job of maintaining Sam Wilson’s status as a supporting character in Captain America, the truth is that the Falcon has long been ready to stand on his own. With his background on the streets of Harlem and Los Angeles, his flight capability and his training from Steve Rogers, the Avenger seems almost perfect for the role.

Francavilla’s artwork also seemed to suggest as much by perching Falcon on a fire escape looking down at the neighbourhood. His attitude exudes confidence, almost to the point of feeling comfortable. With no role as yet in any of the Avengers teams, Sam Wilson would have had a field day being The Man Without Fear.

But now that Black Panther has been announced, what does this mean for the title? Hopefully, a chance for a character with years of history to find new life in a new environment. T’Challa is sans his technological advantages, though it is not clear if this is by choice or not. He is also supposedly out of his element, having governed the land of Wakanda for a while now, and it will be interesting to see how he juggles his new responsibility with his marriage to the X-Man Storm, though too little has been said about their union.

With this new situation that T’Challa finds himself in, I guess it is Marvel’s hope that they can reignite interest in the character. It is a costly gambit (pun not intended), for if Black Panther: The Man Without Fear does not live up to the hype, it could mean a huge blow to any post-Shadowland plans, and a rushed job to have Matt Murdock reinstated with the title.

As with any new writer, and David Liss is still relatively new to comics, I will only pass judgment after I’ve seen Black Panther: The Man Without Fear #513 later this year. That being said, Francesco Francavilla is an amazing artist and I have no doubt that he will be a huge boost to this title.