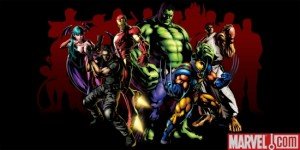 With the rampant success of Street Fighter 4, and the huge surge in Marvel’s popularity over the past several years, is anyone really surprised that after over a decade since the last installment, we have been promised Marvel vs Capcom 3:  Fate of Two Worlds, due early 2011 for the XBox 360 and the Playstation 3.

Capcom revealed as much as they could about the new game at their recent annual event, including the much belated fighting-game debut of Resident Evil’s other protagonist Chris Redfield.

So what can we expect from the first fighting game that is powered by an advanced version of the MT Framework, the same engine that runs Resident Evil 5 and the upcoming Lost Planet 2?

It is understood that the Marvel vs. Capcom 3 will have the same cutting edge graphics as the recently released “Tatsunoko vs. Capcom: Ultimate All-Stars” for the Wii, and will have an initial roster of 30 characters, 15 on each side. We’ve already mentioned Chris Redfield, and shown clearly in the released promo art are perennial favourites Ryu and Morrigan from Capcom, while Marvel’s banner is held up by Hulk, Iron Man and, to no one’s surprise, Wolverine. According to Capcom producer Ryota Niitsuma, there will naturally be DLC characters in the future, but that is not a priority for them yet.

It appears that Capcom’s main concern is to tap onto the “entertainment juggernaut” that Marvel has become over the past decade – Hulk, Iron Man and Wolverine are now mainstream icons thanks to their respective movies and are accessible to a whole new generation of gamers. Looking at the upcoming movies, Captain America has long been a choice for Capcom, but I wouldn’t be surprised to see Thor make his first appearance as a playable character.

What I am curious about is whether Capcom is able to have lightning strike the same spot twice. Street Fighter IV was hailed as being accessible to both old and new fans alike. That seems to be the same agenda for Marvel vs Capcom 3, according to Capcom’s Community Manager Seth Killian. An evolved fighting system is being hyped, with signature aerial combos being the key draw. With the number of potential heroes in the air, like Iron Man and Morrigan, this may bring the traditional fighting game into a new level, literally.

So will Capcom be responsible for yet another critically acclaimed fighting game in 2011? Here’s the trailer they released, which is rendered by the engine (though I’m thinking only Ryu’s hadouken at the end is as far as actual gaming footage is concerned). Decide for yourself.