It may it April Fools’ Day today, but at Marvel, things are getting deadly serious. With Fear Itself making its first issue debut on April 6th, the Marvel hype machine has released what is probably the last salvo in an extensive marketing campaign lasting almost four months long. The trailer for the big 2011 comic book event reveals almost nothing new, but ties in all the previous promotional material into a truly ominous 90 seconds.

Let’s break down the trailer to bring everyone that hasn’t been following up to speed.

Firstly, here’s the transcript of the voiceover, at least as best as I could capture it:

As long as there has been life, there has been a secret. A secret hidden from the ages, for so long, that mankind cannot even begin to comprehend its meaning. A secret some have risked everything to keep hidden, much afraid.

And now, during one of mankind’s darkest hours, a woman, on a quest for vindication, discovers an ancient power. The Earth, in the clutches of the God of Fear. The heroes, powerless to stop him. The Serpent shall call upon the Worthy, to be his generals of mass destruction. Iron breaks, soldiers fall, gods die.

This Summer, the Marvel Universe has everything to fear.

We know, based on promotional material, that the ‘secret’ is that Odin has not always been the All-Father, that he once had a powerful rival – an Old Testament-worthy opponent known simply as The Serpent – whom he had cast away and kept hidden all these millennia without the knowledge of the other Asgardians. 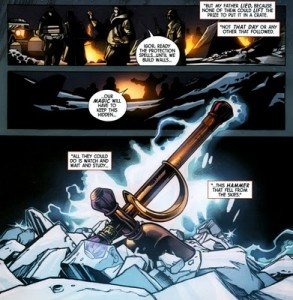 The prologue issue, Book of the Skull, further reveals that, under the instruction of the Red Skull during World War II, the Thule Society awakened The Serpent from whence a hammer fell to Earth. The existence of this hammer, one of presumably eight, and analogous to Thor’s Mjolnir, is known only to the Red Skull, the Thule Society and later Sin, the new Red Skull, who upon her escape from incarceration seeks it out with the help of Baron Zemo.

The power of the hammer transforms her, as shown in the trailer, into one of the Worthy, a general of The Serpent – who also happens to be the deistic embodiment of fear. The Serpent has returned, and naturally controls Earth with his immense power through his Worthy, eight heroes and villains who are further empowered to be capable of “mass destruction”. Even the combined might of Iron Man, Captain America and Thor is no match for these new augmented Worthy, leaving the Marvel Universe in the grip of… Fear Itself.

I have to say that if there was anything that would successfully target both veteran fans of Thor and Captain America, as well as a whole new generation of fans who undoubtedly will take to these two heroes the way they took to Iron Man after his feature film debut, it would be this storyline crafted by Marvel Architect Matt Fraction. His timing is almost eeriely perfect, with the natural disasters happening these past few weeks in Asia and the political unrest in the Middle East, not to mention the ever increasing pervasiveness of paranoia in North America, a story like Fear Itself resonates only too closely with those that can see the parallels in the real world, without losing its comic book touch, with the likes of massive supernatural powers and undoubtedly one big superhero fight after another.

Marvel’s superheroes have throughout the decades, been rooted, at their very essence, in the reality of humanity. Often, despite their powers, they are flawed people with faults and failures like anyone else, some glaring, others more subtle, and a handful, like Odin, only waiting for an occasion like this to bring a long-forgotten mistake back to the fore, with dire consequences. It is extremely heartening to know that Fraction has the perfect grasp on this crucial aspect of Marvel’s storytelling over the decades, and I can’t wait to see him execute his plan to cause… Fear Itself.