Plenty of good stuff from last week’s shipment, we continue with DC Comics’ #0 titles and Marvel slowly but surely wrapping up their Avengers vs. X-Men saga. It’s the usual spoiler warning and 3… 2… 1… go! 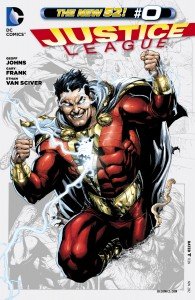 If there’s one word to describe the Shazam storyline, it’s “believable”. Writer Geoff Johns took his time to flesh out not just Billy Batson’s character but also create a setting and cast that is much more relatable to today’s audience. You can believe that a less-than-perfect misfit like Billy can meet an ageless wizard and then transform into a mighty mortal like Captain Marvel. It doesn’t matter if you are not familiar with the original character who was created way back in 1939; the magic in this reboot or updated version is charming and fun enough to captivate most modern readers today.

It’s almost an entire issue of art by Gary Frank! What more reason do I need to love Justice League #0? I have been a fan of Gary Frank since his days at Marvel drawing Peter David’s Hulk and I’m loving every panel of this. I like how he did the Rock of Eternity and populated it with the stuff of legends from other myths. You can even spot a little thing or three from Journey to the West.

A thoroughly enjoyable issue, and if you like this I’d say wait for the inevitable collected edition with just the Shazam storyline instead of grabbing the back issues cos the Justice League main story ain’t exactly the best Johns has written compared to his early Green Lantern and Flash days. 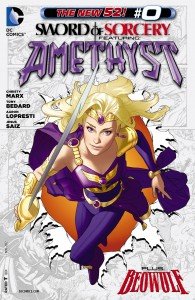 Sword of Sorcery #0 Featuring Amethyst. This one flew under my radar; as I wasn’t expecting to pick it up, … hmmm… still don’t remember what made me change my mind. Anyway I picked up the issue and boy, was I pleasantly surprised!

Judging from this first issue, it sure looks like that writer Christy Marx and artist Aaron Lopresti have delivered a really well written and exciting fantasy series. Strong female leads, eye-catching artwork, a fantasy-themed setting that reminds me of Game of Thrones cos of the many different Cardinal Houses in Gemworld. I like seeing all these fantasy elements coming together and I think there’s a lot of potential for some cool storylines here.

Now I remember seeing the original series on the newsstands decades ago but never really followed it. I was more into Arak Son of Thunder, Arion Lord of Atlantis and Warlord. Quick now, retro flashback! How many of you remember those 3 DC Comics fantasy titles from the 1980s?

Anyway, back to the new Amethyst, in this reboot version our heroine Amaya and her mother are on the run, in the DC New 52 world, from her evil other dimensional aunt. We got a little Snow White and The Huntsman thing going on here as the evil aunt Lady Mordiel (any relation to original series villain Mordru I wonder) is the current ruler of House Amethyst and she’s out to make sure that sister and niece don’t show up alive to reclaim the throne.

The backstory Beowulf by writer Tony Bedard and artist Jesus Saiz is more or less a retelling of the classic Beowulf tale but this time it’s set in a post apocalyptic world. I’m not sure where exactly it’s headed or even if it’s actually the set-up for another reboot DC character (Atomic Knights maybe?). So far it’s Saiz’s impressive artwork that’ll have me coming back for more. We’ll see how this turns out.

So if you are into thrilling fantasy, sword and sorcery stories, and with this being the first issue, it’s as good a place as any to start. 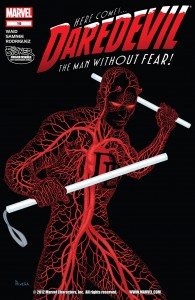 Daredevil #18. To be honest, I was a little afraid to pick up this latest issue of Daredevil, not because it’s getting bad or anything negative like that. It’s actually still as good as ever, but it appears that writer Mark Waid is determined to bring back the doom and gloom Daredevil that was such a depressing fixture during Bendis’ and Brubaker’s runs.

For the last couple issues, someone or something has been turning our hero’s private life upside down as we see (pun not intended) the return of Murdock’s blind and mentally unstable ex-wife, as well as a host of other personal crises. It’s a clear departure from how the series started with an almost happy-go-lucky Daredevil and Matt Murdock.

But like I said, this series is still hanging strong and the art by Chris Samee is just as near perfect as can be. I’m just a tiny bit weary about where it’s all going. However I thrust Waid and if you can’t thrust the winner of this year’s Eisner Awards for Best Writer and Best Continuing Series, who the hell can you thrust?