We all know how the Internet is always filled with controversial topics and scandals, well, the online comics community definitely has seen its fair share of it lately. There were two recently that caught my attention. But right or wrong, maybe that’s for another post to explore. Right now I would rather look beyond the controversies and at the 4-colour stories instead. So look out cos as usual there be spoilers ahead! 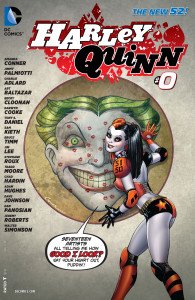 Harley Quinn #0. Honestly I had no idea what to expect in this first or rather zero issue starring the one and only Harley Quinn, written by the husband and wife team of Jimmy Palmiotti and Amanda Conner. Now the controversy started when DC Entertainment did an open talent search for an artist to illustrate a single page portraying a naked Harley in a bathtub contemplating suicide, now I’m putting it mildly here. Needless to say, the public didn’t take too kindly to that page description and DC had to do an immediate backtrack on the whole deal.

So how was the issue? Like I said, I didn’t know what to expect and judging from that talent search request, I was honestly preparing myself for some low-brow humor at best. Well, I was pleasantly wrong and this issue was one of the most unexpected good reads for me last week. To me, Harley was the best thing to come out of the ever popular Batman: The Animated Series almost two decades ago and I’m glad to see that Palmiotti and Conner has taken some of that madcap humor to a really cool new setting by breaking the fourth wall.

In this prequel issue, Harley learns that she’s finally getting her own series and goes on a quest for artists. What we got is an eye-popping showcase of some of the best art by top comic illustrators like Sam Kieth, Jim Lee, Walt Simonson, Adam Hughes and of course Harley’s co-creator Bruce Timm as well as upcoming series artist Chad Hardin. There’s also a ton of in-jokes and references that longtime fans would likely get. As for the contentious contest page, as expected it’s been toned down or rather altered a whole lot and it’s drawn by winner Jeremy Roberts.

The ongoing Harley Quinn series looks like it’s off to a good start. I thoroughly enjoyed this issue and will definitely pick up issue #1 when it’s out. 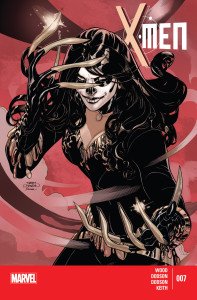 X-Men #7 and Conan The Barbarian #22. Both titles here are by writer Brian Wood who found himself in the middle of sexual harassment allegations earlier this month. You can read about it here and here.

Basically female cartoonist Tess Fowler identified Wood as the “well-known writer” who harassed her at a comic convention. Since then more than one woman has come out and made the same charges against the writer, and Wood has also issued a statement somewhat admitting to the incident but dismissing it as just him making “a pass” at Fowler. Now the kicker here is Wood has always been seen as an advocacy for women characters with strong female casts in his past and present titles. So you can see why everyone is paying close attention to this and wondering if he’s really a habitual perv in disguise all along or what.

Well, I think I’ll just stick to looking at the two titles Wood is currently writing for now. I actually picked up X-Men #1 to #3 featuring an all-female X-Men team and kinda liked it until the rather anti-climatic ending. Anyway I decided to grab the latest issue #7 to see if it’s got anything in there worth coming back for.

It’s the start of a new 6-part storyline featuring the return of Lady Deathstrike and a surprise female villain whom I believe is making her first X-book appearance here. Great art by Terry Dodson as it’s always nice to see him back on an X-book. One little gripe is how three of the main characters Monet, Karima and Ana Cortes look almost alike, that I had to do a double take or two between pages.

I have to admit I lost touch with X-Men lore for a few years so I’m not exactly sure what happened to Lady Deathstrike the last time she messed with the mutants. It’s a nice and intriguing opening to a larger story with enough action to keep most X-fans coming back next issue. I still find it strange that they never really explained where the men are or maybe they did after issue #3, I dunno. I mean, Storm and Rouge are usually around with Wolvie and the rest of the gang in the other X-titles so where are the X-guys now?!? 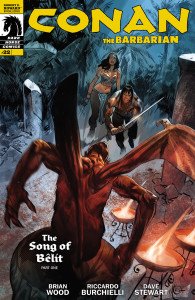 On to Dark Horse Comics’ Conan The Barbarian and let me first state that I’m a huge fan of Robert E. Howard’s Conan, which makes this whole experience a bit painful. Painful because I wanted to drop this title since a year ago, when Wood started portraying my favorite Cimmerian as some emo teenager who’s spending more time discussing his feelings rather than expressing them through blood and violence. I enjoyed his first few Conan issues before it started to deviate from the hard drinking, sword-welding, whench-loving barbarian that I miss and love from my childhood.

Issue #22 starts the adaptation of Robert E. Howard’s Queen of the Black Coast story that also (thankfully) marks the end of the Belit storyline. Wood is stretching the original short story into 4 issues here. Maybe he thinks he’s Peter Jackson or the extra pages are for more of Conan’s reflective monologues. This latest issue is a slight improvement over the last few story arcs especially the one where Conan and Belit just lazed around and got stoned for 3 issues. Really.

I’ll stick around just because I’m a completest but in the meantime I’ll be keeping my fingers crossed for a return of an older, more familiar Conan next year.