Look who’s back in Singapore! It’s the Geeks’ favorite man from Marvel, C.B. Cebulski, the one and only Senior Vice President, Creator and Content Development at Marvel. He’s here to deliver a talk on Marvel entertainment to media folks from around the region at this year’s Asia TV Forum & Market. 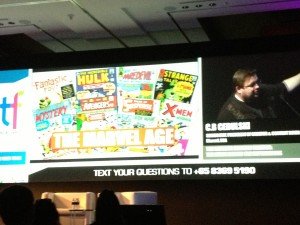 It was an engaging hour plus talk that started with the history of Marvel Comics from its early days as Timely Comics. Followed by how Stan Lee revolutionized everything with the introduction of Spider-Man, Fantastic Four and the rest of the gang from the Avengers. Then we got a nice little trip down memory lane with some retro images of Lou Ferrigno as the Hulk as well as old Spidey and FF cartoons. Basically it was of an introduction to media folks who aren’t familiar with the Marvel Universe (yes, your mom and dad aren’t the only ones!).

Next up was something a lot more familiar to the audience as C.B. gave a rundown on the success of everyone’s favorite Marvel movies from Blade to The Avengers. But as usual, it was talk on what’s coming up that got us fanboys excited. C.B. then shared some insight as to what’s coming up in Phase 2 of the Marvel Studios masterplan.

Phase 2 will kick off with next year’s Iron Man 3 which fanboys here will be glad to know will be a week before its May 3 release in the US. There’ll be six movies in Phase 2 (the sequels to Iron Man, Captain America, Thor and Avengers as well as the already announced Guardians of the Galaxy and Ant-Man). And that’ll take us to the end of 2015. Unfortunately we didn’t really learn any new storylines, photos or behind-the-scenes news other than what’s already out there on the Internet.

We also got a good look at the trailer for the new 3D animated movie set for release only on Blu-Ray, Digital and DVD next year April, Marvel’s Iron Man and Hulk: Heroes United. According to C.B. the Hulk in the 3D movie is pretty much based on Mark Ruffalo’s version so fans of the Avengers’ movie would definitely want to get their hands on it.

A brief but lively QnA session ended the session. Once again, nothing exclusive was revealed despite an attempt to find out more about the upcoming S.H.I.E.L.D TV series. But stay tuned! C.B. is still on the island so wish us luck as we’ll be trying to bribe some exclusives outta him with some irresistible local food!