As we get ready for the Singapore Toy, Game & Comic Convention in less than 12 hours, Here Be Geeks would like to welcome British writer Andy Diggle (The Losers, Green Arrow: Year One, Daredevil, Doctor Who, 2000 AD) to our shores. 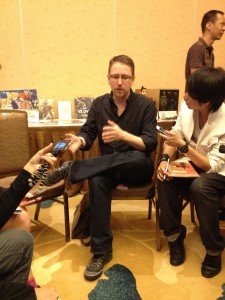 We managed to catch up with a slightly jet-lagged Andy at the morning media preview to find out more about his upcoming projects, his views on comic book creation, the new Green Arrow TV series and more.

Well, we did ask, but there’s no answer the million-dollar question, “Is Andy Diggle the new Action Comics writer?” Still, do keep an eye out on things as they develop. He did say he was working on three publications for three publishers.

In the meantime, be sure to check out Andy’s Doctor Who series with artist Mark Buckingham from IDW Publishing. The series will feature the 11th Doctor as well as companions Amy and Rory. According to Andy, there’ll be original creatures and the comic book series will run parallel with the current TV series. 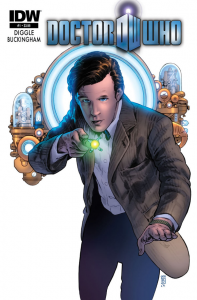 His first trip here to Asia has surely made an impression on Andy. When asked if his maiden visit has sparked off any possible future story ideas, the enthusiastic British writer described how his hotel room view overlooking the shipyards and cargo tankers has inspired him to come up with tales of modern day pirates. And with this month being the Chinese Festival of Hungry Ghosts, he thought that there’s definitely a potential story here since it’s like a “Halloween that lasts a month.”

Now if you are waiting for a sequel or even possible movie adaptation to Andy’s brilliant Rat Catcher title from Vertigo Crime, don’t hold your breath. Andy declared that it’s unlikely there’ll be a sequel as the Vertigo Crime brand isn’t around anymore and as for a movie, that’s in the hands of Warner Bros.

As the upcoming Green Arrow TV series is heavily based on Andy’s Green Arrow: Year One mini-series from DC Comics, his thoughts on the show was something everyone wanted to know. “I have heard nothing but positive stuff about the show,” he said. He went on to describe that even through the story will be set after Ollie has returned to civilization, there’ll be weekly flashbacks to his time on the mysterious island.

Finally, if you are thinking of breaking into the comic book industry, Andy has some advice. Read as many comic scripts as possible, visit comicbookscriptarchive.com to see how the pros are doing it and never stop writing. If you are on Twitter, there’s also the hashtag #createcomics to help you find a collaborator.

See you all at STGCC this weekend!