The first wave of the new DC 52 Universe titles has hit our shelves and sold out faster than The Flash changing his underwear. All are already headed for second printing right now. To me, some stories turned out better than I expected while others didn’t exactly live up to the hype. So here are a few quick thoughts on some of the titles that I managed to get my hands on.

Action Comics #1. I think there’s a rule in the DC Universe that all superheroes’ year one stories has to include a scene where police and SWAT teams surround the hero and chase him across town. Cos that’s what young Superman does in the first half of this issue. And I guess rightly so too since the title is ‘Action’ Comics. A fast-paced, action-packed issue by the one and only Grant Morrison, that kicks off the new Superman’s career.

Like all the new 52 titles, this is a perfect jumping-on point for new readers. This is the Morrison that I like, with a straightforward and smartly written story, and not the Morrison that turned out the doped-out Return of Bruce Wayne last year, geez man, that was too metaphysical even for me. But I digress.

So what else did I like about Action Comics #1? The art by Rags Morales (Identity Crisis) is perfect here. Clean with just the right intensity of movement and force. Plus Clark Kent looks just the right age; I mean you can tell he’s still too young to be the Superman in Justice League but also no longer a teen. Lex Luthor is back to being a smooth, cool evil genius unlike the hands-on super villain he was a year ago in the old universe, well, at least for now. I’m also looking forward to the all-new character dynamics and relationships, Lois Lane and Clark working for rival papers, how the people of Metropolis treats their hero for the first time, and really, do I see a budding bromance between new ‘best friends’ Clark Kent and Jimmy Olsen?

Definitely my favorite pick of the week.

Detective Comics #1. Ouch! I had so much high hopes for this one. Bats is my all-time favorite hero and the Joker my number one bad guy so naturally I was rooting for this issue.

I’m sure writer and artist Tony S. Daniel brought his ‘A’ game but some parts just didn’t work as well as others. Like Action Comics #1, there’s a lot of similar action here (yes, Bats fights the local SWAT team too). But while the action moved and advanced Supes’ story, this one just felt like a needless demonstration to show how badass everyone is. So the cops are after Bats but they still allow Gordon to flip the switch on the Bat Signal?

In this first issue, Bats goes after the Joker and a new villain called The Gotham Ripper. Quick, guess what he does! Yup, he rips his victim’s face off. Now if not for the last ‘Holy Crap?!?’ page (no spoilers here!), I would seriously not recommend this issue and just wait for Scott (American Vampire) Snyder’s Batman #1 due in a couple weeks. But it is a very intriguing cliffhanger and I guess I will stick around for at least this first arc. 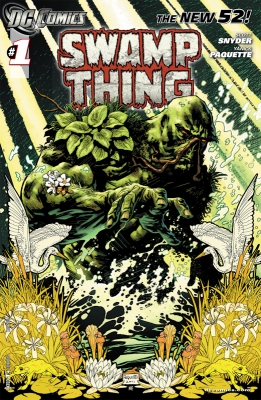 Swamp Thing #1 and Animal Man #1. I’m looking at them together here cos these two former Vertigo titles are supposed to herald us to ‘The Dark’, the mystical corner of the new DC Universe.

I was a big fan when Alan Moore and Grant Morrison were on those two titles respectively. So when I first heard of these two Vertigo characters heading into the new DC Universe, I didn’t really know what to expect especially since DC promised that they would still carry a certain Vertigo-style horror element to the stories.

I read them the night after I got them and my only regret is I didn’t put them on the very top of my read pile earlier! They blew me away! Both are super hero stories with just the right dose of horror to send a small but icy chill down your spine. Make no mistake; there are some nasty scenes here, especially in writer Scott Snyder’s Swamp Thing. Just when you think you are reading a good superhero comic, turn the page and whoa!! something really creepy Vertigo-style happens! This is my first taste of Yanick Paquette’s amazing art where every panel is such visual treat and you can definitely catch little glimpses of influences by Stephen Bissette and Rick Veitch here. 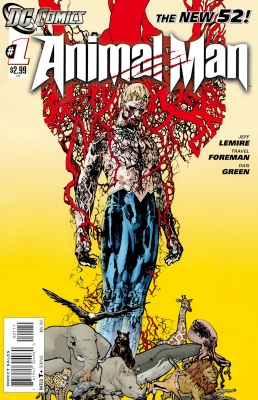 Writer Jeff Lemire played the horror card a little subtler in his Animal Man title. When you see Buddy Baker aka Animal Man’s happy family, you just know that’s not going to last long and soon something bad called ‘The Red’ (wonder if there’s any relation to Swamp Thing’s The Green?) does come visiting by the time you hit that last panel. Like in Swamp Thing, we see the evil presence lurking in the shadows, you know it’s spreading and slowly some truly nightmarish stuff is going to happen.

After turning that last page, I’m just happy to say that the Vertigo spirit is alive and well in these two titles.