It’s the second month of DC’s new titles and things are still looking good for some of them. Not all, just some. Plus a quick look at the aftermath of this year’s Marvel’s summer event. 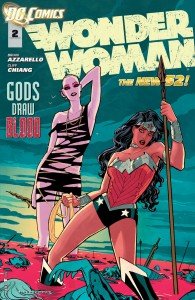 Wonder Woman #2. Writer Brian Azzarello and artist Cliff Chiang’s take on the new Wonder Woman and her Greek pantheon continues to blow my mind away. Together with Grant Morrison’s Action Comics and Scott Snyder’s Batman, DC’s holy trinity is definitely in excellent hands.

As expected, Azzarello has given us a strong, impressive female lead as well as an equally compelling and colorful cast of Amazons and goddesses. Chiang’s ladies all come with clean lines and irresistible curves, the way I like my women. Although set in today’s 21st century, this first story arc is heavy on Greek mythology as Wonder Woman tries to protect a young mortal who might be the latest in a line of ladies that Greek god Zeus has ‘consorted’ with. With the possibility of another newborn demigod on the way, Zeus’ wife, the goddess Hera isn’t too pleased and sends one of her daughters to Paradise Island to set things right. Fight scenes that remind me of the recent TV series Spartacus, godly intrigues and a nice new spin to Wonder Woman’s origin, what’s not to love about this series?

Too bad we didn’t get to see more of what Apollo is up to in sunny Singapore. Yup, the Greek sun god was spotted last issue, setting a few ladies ablaze in our fair city. 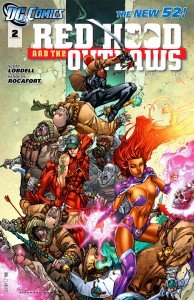 Red Hood and The Outlaws #2. The secret to enjoying some of these new DC 52 titles is simple. It’s to just ignore everything you know about the old characters and just tell yourself that these guys and gals have nothing in common with their previous namesakes at all, well, except maybe their names.

Written by Scott Lobdell, the team of Red Hood aka former Robin, archer Speedy and alien princess Starfire, well, they may look almost like their old counterparts from earlier this year but they sure don’t act like them. So if you are new to them, better yet if you are a red-blooded, male teenager with raging hormones, this might well be the title for you! As we saw from last issue, a semi-nude Starfire is totally fine with shagging former sidekicks Red Hood and Speedy. In issue #2, there’s more action as the team is talking smack, striking cool poses and beating up lots of bad guys. Straightforward plot as we follow Red Hood graduate from sidekick to leader by travelling around the world, engaging in macho banter and dodging assassins. What was the story about? I forgot! Then you also got gorgeous art by Kenneth Rocafort, well, that’s almost worth the admission price.

Like I said, I don’t think it’s the best new DC title out there but I’m sure there’s still a healthy audience for it. Go testosterone! 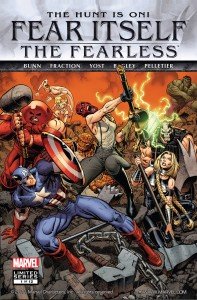 Fear Itself: The Fearless #1. Previously, in the final issue of Fear Itself, Thor paid the ultimate price to defeat his evil uncle, the Serpent. In doing so, the eight magical Asgardian hammers were lost once more while Sin managed to make her getaway.

So now in this new 12-issue spinoff series Fear Itself: The Fearless, we learn that at least some of the hammers have been found by the US government but the weapons are now pretty much powerless. Captain America and his Secret Avengers have been placed in charge of the hammers but team member, the Asgardian shield maiden, Valkyrie has other plans for the former weapons of mass destruction.

It was the little wrangle over jurisdiction that I found hard to fathom. Valkyrie believes that since the hammers came from Asgard, she has a legit right to deliver them back to Odin for safekeeping but Cap thinks otherwise. He then goes all Republican on her with his take on why the US is the most secure place on Earth for the hammers. That whole scene just felt weird to me. Well, needless to say, she goes rogue on her teammates and that’s when the fun begins. It certainly looks like writers Matt Fraction, Cullen Bunn and Chris Yost have an exciting tale to tell here. A direct continuation from the events in Fear Itself, you got Sin back as the main antagonist with her regular neo-Nazi squeeze Crossbones in tow. It’s also interesting to see the spotlight on one of Marvel’s lesser-known female characters, Valkyrie. And with 11 more issues to go, I’m hoping to see stronger character development than what I saw in the 7-issue Fear Itself series. A good series to pick up if you enjoyed Fear Itself.