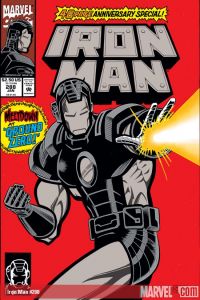 Just before I started collecting comics regularly, I spotted a copy of Iron Man #288, a massive 48 page anniversary special, at a jumble sale held in school back in 1996. Though the comic was 3 years old, the foil cover featuring the steel mesh armoured suit still attracted me. As it turns out, I had stumbled upon James Rhodes’ second stint as the replacement superhero, this time, due to the death of Tony Stark.

Reading this comic written by Len Kaminski defined the character of Rhodey for me and, till today, both he and the steel armour that would later be known as War Machine would become my favourite among Iron Man’s vast cast of characters. So naturally, I’d be jumping with crazed excitement at last year’s news of a new ongoing series with him as the central character. Right?

This picture on the right says it all. It’s taken from the same Marvel.com article that quotes Iron Man 2.0 editor Alejandro Arbona as saying “Evolve or die”.

Wait. Iron Man 2.0? Who are you and what have you done to my War Machine?

For a start, the name change suggests a cheap marketing ploy to hook readers that are less familiar with the “War Machine” moniker and would literally only recognise the grey steel armour from the movie Iron Man 2. Not to mention that clearly, it would seem like Rhodey’s messy life-story has been conveniently ignored and retconned, returning him to his military roots as seen – once again – in the two Iron Man movies. 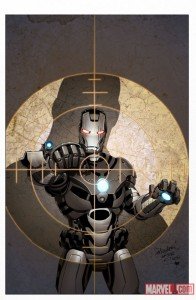 Yet, these are forgivable changes that can be overlooked by even the most hardened fan. What is difficult to stomach is the idea that “War Machine” is an outdated concept. While Iron Man director Jon Favreau kept the signature gatling gun in the movie, it appears that writer Nick Spencer, making his Marvel Comics debut, believes otherwise. “He’s changing the way he fights, going from essentially a walking tank to something faster, stealthier and more versatile,” he tells Marvel.com. My first reaction to this was to scoff – War Machine was always the tough-as-nails battering ram to Iron Man’s sleek, precision blade. This newcomer clearly has missed the point. Yet, in an interview with Newsarama, Spencer seems to say all the right things to assuage fans’ fears.

“Creative geniuses love stable, down-to-Earth people because that’s what they’re not,” Spencer said. “If you look at Rhodey, and you look at Pepper, that’s what they are. They are pragmatic, realistic, rational people in a way that Tony can never be.”

At this point, the disclaimer must be made that I’m well aware that my man-crush on James Rhodes puts me in the minority here. The truth is that as War Machine, he hasn’t quite captured the imagination of most fans compared to Tony Stark – even before Iron Man became the household name he is today – one failed ongoing series after another seems to confirm that. 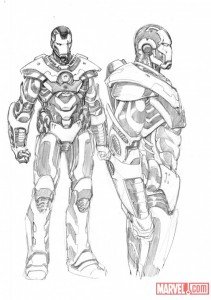 So Spencer seems to be on to something, if he’s planning to redefine War Machine the armour, without changing the man within. After all, the motivation is clearly based in reality – modern wars are no longer fought on battlefields but in cities and towns, a “walking tank” would do little good in such protracted violence. Yet, despite the preference for stealth and recon, he still remains a distinctively military force, in contrast to the cutting-edge techonological marvel that is Iron Man.

Spencer himself has a respectable portfolio of indie comics despite his short time in the industry. With three creator-owned titles under the Image Comics banner, he’s just the kind of creator that’s drawn to the House of Ideas, where some of the most talented writers like Ed Brubaker, Matt Fraction and yes, even Brian Bendis, became bona fide stars.

The other thing to look forward to is the legendary Barry Kitson’s art. Ironically, the last time Kitson pencilled an Iron Man comic, it was the back-up story of none other than Iron Man #288, where he showed a remarkable grasp of Tony Stark’s origins. He’s also the man who worked with Marvel Architect Fraction on The Order, which became a prequel of sorts to the writer’s award-winning run on Invincible Iron Man.

Kitson’s art, on second inspection, retains the familiar heft that is associated with War Machine, and the new embellishments only serve to further emphasise that this is a long overdue upgrade, but not an entirely new design. Despite the lack of the signature gatling gun, the suit remains an undisputed offensive weapon, and in that aspect at least, the concept works. Not to mention, I’d love to see how he’ll look in Secret Avengers.

At the end of the day, it is reassuring to know that Marvel isn’t against giving Rhodey another shot at the big time, and I’m hoping Iron Man 2.0 could be the ongoing series that finally sticks for the former War Machine. 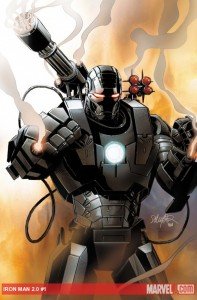