Another month in and we’re once again back into the world of WWII’s Peter Pan: Peter Panzerfaust. We left off at issue two where Peter and the Lost Boys’ escape boat was bombed to smithereens just as they were close to getting out of the war and escaping to London. Now if you were any other escapee you’d be puree on the bottom of the sea, but these are the Lost Boys with Peter Panzerfaust himself – what crazy escapades will Peter bring them along next? 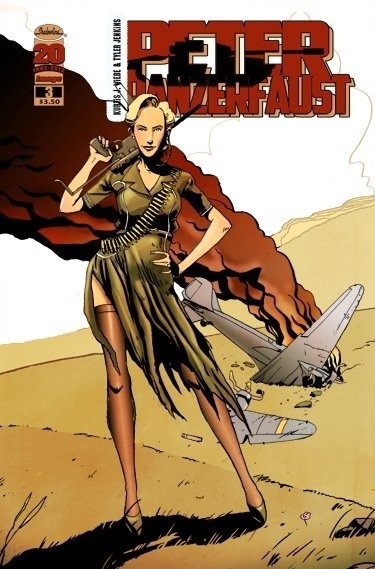 And I think that’s a key point that writer Kurtis J Wiebe and crew bring up during the latest issue – that Peter, while he’s bringing the boys to safety, is first and foremost chasing danger. Even Tootles himself brings it up. It’s definitely a way of looking at Peter Pan away from the usual Disney version – as the boy who never grows up, how does he make the adult decisions to protect the lives of the boys he’s with? Now with the story set in WWII France – how often and for how long can derring-do bring the ragtag group forward before things get actually nasty?

Another thing – most of the nasty things that are done? They’re actually perpetuated by Peter and the lost boys, where youth, lacking the filter of maturity, does wild, exciting things without thinking of consequence. You get the idea that the boys are starting to show their own expertise and opinion, and as a collective they start to bring the Nazi’s down, even in the most extraordinary of circumstances.

The good thing then is that each boy is starting to really get their own voice – from vengeful to fearful to timid to cautious, and how Peter reacts to each of them differently. I think this was one thing that held the first two issues back, but with the more recent developments I’ll have to say this comic has grown in strength, and it’s a testament to Wiebe’s efforts. Another thing – on top of the realism of it all, Wiebe still manages to bring back some of the “magic” of the original, this time involving the lost boys. That was a nice touch and it’ll be cool to see more of that.

And after all I’ve written about – this isn’t even the point of the issue. Yes, even before the end of it all I believe we get the introduction of two more main characters – one you can’t miss (honestly, just look at the cover – that’s half a hint), and one that you can easily guess. With the Peter Pan tale in mind – where on earth will this take go next? Gotta read on to find out…