As per normal, this is gonna be spoilerific! Plus, my comic chunks are gonna get a bit chunkier since I got excited on the issues. Most of them are endings to their current story arcs! 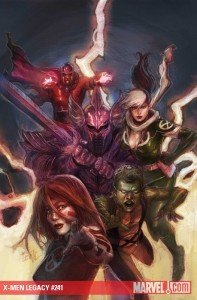 Fun fact for this week’s cover! If you haven’t been collecting the series or just think it’s a hassle to go through your comics collection to find specific issues, the cover for X-Men Legacy #241 is done by Leinil Francis Yu. He’ll be one of the guests for Singapore Toy, Games and Comics Convention. So if you have no idea which one of your comics are illustrated by him but still want an autograph, heh you could probably buy this week’s issue to keep.

Back to the story! Rogue is so pissed off that she’s not smiling when she’s tossing everyone away while finding Erik in Quitado. Meanwhile, you can imagine the slow motions then to fast speed visuals like in 300 or any of the latest action movies as Erik uses his powers against people, using the iron in their blood to shove them away cause he’s just that cool and hot.

It’s a whole rescuing each other deal. Luz stops being that much of a brat to help the other X-Men get to Rogue and Erik (with the unconscious wife to be of Indra). For some reason, Rogue is raging a lot that Indra stops her from killing people. Nonetheless, Luz stops the rest of the Children of the Vault by letting the others escape Quitado, leaving her back there to be a battery once more.

Indra of course, makes his choice in not marrying Vaipala. All is well. Sorta. We’ve got a semi bittersweet ending with Luz making an illusion picture of Indra, guess she did like him and learned something about not being selfish. Ok, yay…

Back to X-Men adventures but wait, what. Did everyone forget about Indra’s brother? Hellooo? Is he still going to be in a coma or since he’s not an X-men they’ll be treating that plot point as, “Ok, he’s in a coma… BUT LET US GO BACK TO THE MUTANTS AND FORGET ABOUT HMM BEING A PLOT POINT IN THE FIRST PLACE, MMMKAY?”. I guess so. Humans matter! They do! ~sobs~ 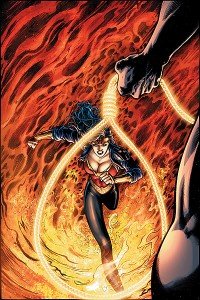 And through the flames in Wonder Woman #604, it is a glorious battle of Amazonian proportions. Like, wow. I don’t know what to say. Well, I do since I’m writing this but we find out who the burned man is and he’s a despicable former soldier who delights in tormenting and killing people.

He made a deal with a voice (mysterious as of now) as he burned in a fire that told him he would be whole once more if he killed all the Amazonians in the world. And then Wonder Woman got all bad ass on him since he had killed her mother and many of her Amazonian sisters. I have to say the action sequences of the art in this issue is done exceptionally well. You really should look at the expressions of the characters faces if you get this issue.

In the fire as WW fights the colonel, she rages enough to just heck it all in an ALL OR NOTHING way. Interestingly, he’s afraid of the magical fire and WW gets it into her head that while she doesn’t want him to kill the others, it means she’d rather take him down with her. However, UNEXPECTEDNESS HAPPENS! No, WW isn’t going to take him down, her MOTHER is! Duh duh duh.

And thus occurs one of the most awesome scenes that go into the list of the Best Mother Protecting Child Against Evil like Riley from Aliens, Molly from Harry Potter etc.

With that we somewhat end the story but still get a little more as Wonder Woman needs to find… The Morrigan. Oh hey, she realizes she can finally fly too! Yay! I wonder if she’ll get chapped lips at that speed… 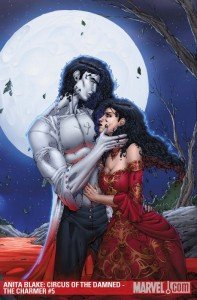 Ok. Anita Blake – Vampire Hunter: Circus of the Damned #5 of 5 is such a mouthful of a title. FYI, this is the comic adaptation of the novel series by Laurell K. Hamilton. Interestingly, Laurell’s got the 3 book vampire curse which I made up. To me it seems after the third vampire book of a series, the fourth book gets all weird and has an influx of sexy scenes with very little plot.

So this is going to be interesting if Marvel keeps up to do her series in graphic novel form… Meanwhile, one of the things that bug me with the series is the art. The adaptations is pretty good to the books so far but the art is BUGS ME. It’s the eyes you see. When you read the dialogue and the artwork, you will notice the characters looking out of the page?!

It’s like the characters are in some bad soap opera and they keep looking towards the camera or are distracted with something off screen. Ron Lim may draw pretty dresses and relatively hot guys but they just keep looking in the wrong direction! It makes me want to grab the characters in the story and tell them to stop looking at us and concentrate on feeling it instead of just stating their dialogue.

With that said, adaptation’s of the novel cool but eh… It has a to be continued, I just wonder when they will really stop or how will they move around the sexy scenes even if this comic has a mature rating on it. 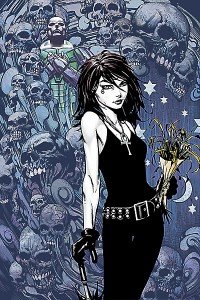 Alright, the cameo that people have been waiting for! Death in Lex Luthor’s Action Comics #894! He gets to meet Death and he gets all scientific and angry about it. Death… is really Death. She’s being sweet and nice about it even while Lex thinks it is really ridiculous and that he wants thinks he has to make a case to the “in charge” to know where he’d end up.

Lex even gets to ask Death about the Blackest Night and she goes all tee-hee in saying that she was busy and that it seemed like people were having fun rising from the dead. To make things short, this was just a brush with Death for him to reevaluate himself. Now, next issue might be the one to do him in.

But most probably not. 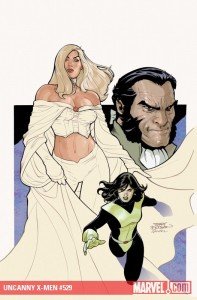 In Uncanny X-men #529, we continue with Emma Frost’s secrecy in shuffling Sebastian Shaw away from the facilities. Even with all her secret and detailed work, Danger actually knows that Sebastian is taken away from his prison but does nothing about it.

It’s now up to Emma, Kitty Pryde and Fantomex to do what they will with him. Apparently they’re heading to space? It looks like it. Part of the issue is about Hope and her little crew, that part of the story is going to branch out into a new series called Generation Hope. Ooh yeah, Kitty’s finally out of her bullet tank! She’s currently in a space suit of sorts that lets her be tangible or at least mobile and not phasing through things.

Three plot points happening here, foreshadowing of some epidemic amongst the mutants is about to happen (they had vampires, so now what?!), Generation Hope preview and then the bit with Emma Frost’s angst. The Generation Hope preview is pretty tempting since the dynamics of her team feel a bit like Runaways but with “teacher” Rogue keeping them company. That’s it for this, they managed to keep all scenes equal but they’d focus more on the epidemic in the next. Whatever it is. 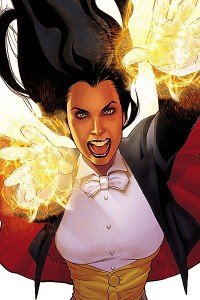 Lastly, for Zatanna #6, she walks down the aisle with dead people as her wedding guests! What amuses me most is that even if she has a wedding dress on, she still wears her top hat! Must… not… do… anything…without the top hat.

It would most likely look silly on everyone else but somehow, her head would look bare if she doesn’t have a hat on it. I have the urge to reread all her spells since they’re just backwards. I think I’m getting into the groove of that to know what she says.

Anyway, her cousin Zach is disappointed and pissed that she didn’t go to his show again. Nonetheless, he went in search of her but realizes there’s something wrong and hunts her down. A team up of magical proportions as he snaps her out of the spell she is under!

She also manages to save the guy who wanted to sell her soul to the demon Mammon in a very unique way. He had it good, really since his soul wasn’t collected by Mammon but Zatanna’s too nice in not letting him be tormented in hell. Blaaar, stupid jerk. Hurrays all around and Zatanna finally gets to watch Zach’s show. The end of the story arc! Paul Dini sure writes well for her.

That’s it for this week’s comic chunks! Definitely chunkier than usual but oh well, hope you guys will enjoy the issues when you get them!

STGCC Updates: It's going to be amazing!